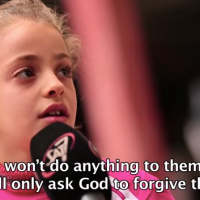 Myriam is wise well beyond her 10 years.

Originally from Qaraqoush, a community south east of Mosul, she now lives with her family in an unfinished mall in a safer city about an hour to the east.

There are 400 families taking shelter in the raw concrete structure, all of them forced to flee their homes when ISIS captured their city. Most of these displaced families are Christians belonging to the Chaldean, Syrian Orthodox and Catholic Church of Iraq’s North-Western Nineveh Plain.

When Myriam was interviewed for a local children’s program, she talked about missing her school and her friends. But she also gave a glimpse into what faith looks like for Christians fleeing persecution.

Reporter: “What are your feelings towards those who drove you out of your home and caused you hardships?”

Myriam: “I won’t do anything to them, I will only ask God to forgive them.”

Reporter: “And can you, too, forgive them?”

This Easter, displaced Christians are keenly missing home, their churches, and long-held traditions. We’re excited to serve children like Myriam. With your help we can create an Easter celebration that provides fun for kids, a sense of normalcy for families, and new traditions for the neighbourhood.