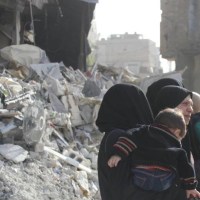 Some of our Syria colleagues were able to enter eastern Ghouta today. They used one word used to describe the scene that met them: “hell.”

More than 1,700 people have been killed since the offensive began last month. 80,000 people have fled on foot to overcrowded shelters where you’re providing urgent medical care.

Meanwhile, thousands of opposition fighters and their families are being evacuated from Ghouta to another part of Syria, under a deal made between some of the rebel groups and the government. The last opposition holdout in the area, the city of Douma, is surrounded. Locals are bracing for a bloodbath.

But not everyone is able to flee this “hell.”

Our colleagues estimate that 50,000 people are still living in the rubble of eastern Ghouta, either unable to leave, unwilling to risk snipers and mortars to get out, or afraid of what awaits them in camps that are already stretched beyond their limits.

For many of these families, there was no relief in sight—until you showed up today.

Our colleagues distributed medicine that you provided—some of the first and only medicine to be delivered inside Ghouta since the offensive began—while performing a rapid assessment to identify other urgent needs we can help meet.

Meanwhile, the team at the medical clinic you’re supporting has been working round the clock, treating hundreds of injured, ill, and vulnerable survivors every day. They’re adding more medical staff just so they can keep up.

The situation in and around Ghouta is dire. According to our staff on the ground, “More than 8,000 human beings are living in [one] shelter with no way out. There is one toilet for every 1,000 people. It is in no way suitable for a human to even step in there.”

The situation in Ghouta is hard for us to wrap our heads around. Even for our colleagues who served in Aleppo last year, the scene in Ghouta is unlike anything.

It’s easy to become paralyzed by so much violence, so much death and devastation. But you have never been ones to look away. You press into pain. You’ve showed up again and again—in Fallujah, Mosul, Aleppo, and now in Ghouta.

Stay tuned for more on the crisis in Ghouta and how we can respond.