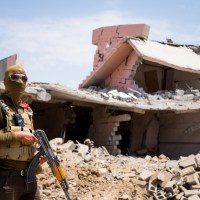 This week, the US State Department ordered all non-emergency government employees to leave Iraq because of escalating tensions with Iran next door.

What is happening, and what does this mean for our work in the Middle East? Here’s what you need to know.

What’s going on between the US and Iran?

Tensions have been high between the two countries since the US pulled out of the controversial nuclear deal with Iran in May 2018.

Recently, the US moved an aircraft carrier group into the Persian Gulf, citing what it claims to be an imminent threat of attack by Iran. Last week, military officials presented a plan to send 120,000 troops to the region if Iran escalates or attacks.

Then at the beginning of this week, four ships off the coast of Iran reported mysterious damage to their hulls. US authorities claim Iran was the culprit, something Iranian officials dispute.

These developments have led many to suggest the US is on a war footing with Iran, drawing comparisons to the run-up to war with Iraq in 2003. Others have downplayed the possibility of war, noting the differences between Iraq and Iran, as well as President Trump’s reluctance to get entangled in overseas military interventions.

So what does any of this have to do with Iraq?

Iran backs a number of Shia militias in Iraq, some of whom played a major role in the victory against ISIS and control parts of Iraq to this day.

Now, US officials fear Iranian-backed militias will carry out attacks against Americans here. That fear is not without precedent; the US blames Iran for the deaths of 1 in 5 US soldiers killed during the Iraq War.

Fear of an Iranian attack led the US to order the evacuation of all nonessential personnel at its embassy in Baghdad and the consulate in Erbil, the Kurdish regional capital in the north.

What does this mean for Preemptive Love’s work in Iraq?

It depends who you ask. Our high-level contacts in the Iraqi federal government have urged us to be cautious, warning us specifically to avoid the south of Iraq for the time being.

Iranian-backed militias don’t have as much sway over northern Iraq, however, and officials here have expressed surprise at the US withdrawal, particularly from its consulate in Erbil.

For now, nothing is changing for Preemptive Love. This isn’t the first time we’ve been under threat. Our work is predicated on accepting that the world is sometimes scary as hell—and choosing to love anyway.

So we’re staying put. We’re continuing the work you’ve entrusted us to do.

But there is no such thing as a risk-free way to love anyway.

Over the last few days, we’ve traveled to some of the far-flung corners of Iraq that were liberated from ISIS in recent years and are now under heavy militia patrol. By all accounts, these are the places where Americans could be most vulnerable: frontier-type places far from the reach of Baghdad, where justice can be ad hoc and sectarian.

If Americans are to be kidnapped, it would probably be easier in places like these—Mosul, Sinjar, Tel Afar—than the streets of Baghdad or Erbil. And it’s these frontier places where your love is on the ground right now, helping families remake home.

So far, we’ve experienced nothing out of the ordinary. But there is no such thing as a risk-free way to love anyway. Not in Iraq, not on the frontlines where you live.

We will be the people who keep showing up. We will lay down our lives, if necessary.

Our work is predicated on accepting that the world is sometimes scary as hell—and choosing to love anyway.

If we leave, we risk creating the very kind of vacuum that makes a preemptive strike easier.

If we leave, who will be left to bear witness? Who will stand with our friends here on the frontlines and remind the rest of the world that their lives matter?

We will stay for as long as we can to serve and to bear witness.

We will stay, because we believe that by showing up—by providing relief, creating jobs, and building community—we can do more than mend the wounds of the last war. We can stop the next war from ever happening.

We’re not here for bandaid solutions. We are here to end war. Join us.