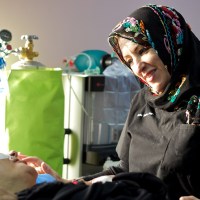 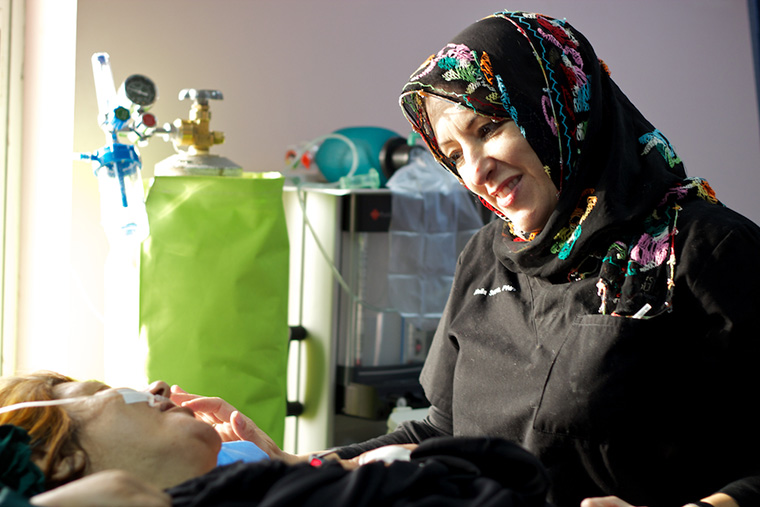 Samira plays with her grandchildren, bouncing them on her legs and giving giggle-inducing “airplane rides”, even though she knows that because of the bulged discs in her back, she will be in agony and unable to move later in the day. I’ve asked her if she’s thought about surgery for her back, but she balks.

Samira doesn’t trust the medical system in Iraq with her back, and she certainly doesn’t have the funds needed for treatment abroad. And so she quietly suffers with daily, debilitating pain.

Change the name, change the ailment, the story remains the same–I’ve met many here who have lost faith in the local medical system, and believe the only way to get good care, especially for complicated heath issues, is to go abroad. It seems the system itself is reinforcing this popular belief–the Iraqi government spends millions to send patients to countries like Jordan, Iran, Turkey and India.

“Although Iraqis have valid reasons for seeking treatment abroad, the sector providing it is full of corruption, most notably favoritism. An administrator at Hilla General Teaching Hospital who requested anonymity told Al-Monitor, “Doctors have received financial compensation in exchange for granting patients reports indicating their need for treatment abroad, despite the fact that their medical condition did not require it.” According to the administrator, “Private offices calling themselves treatment-abroad consulting firms have established extensive networks with specialists and private and state hospitals to amass profits at the expense of the truth.”

Most North Americans are familiar with “medical tourism”. It’s not uncommon for patients in the northern US to seek cheaper medications in Canada, or more affordable dental implants in Costa Rica. But the local medical systems remain funded, robust, effective, and certainly able to handle the needs of the vast majority of the population, who don’t go out of country for care. Iraqis don’t believe that is true for their country.

Dr. Kazem Shaker, attributes Iraqis’ rush to seek treatment abroad to “their lack of confidence in the Iraqi medical sector.” In an interview with Al-Monitor, he said, “Even if the medical diagnosis were correct, and the available treatments adequate, people would remain unconvinced as a result of popular propaganda in favor of traveling abroad.”

“Shaker further said that bolstering this feeling was the “collapse experienced by the Iraqi medical sector since the 1990s as a result of successive wars and the decline in the numbers of Iraqi specialists since sectarian violence erupted in 2003.”

He believes, “Above all else, the state must fight the [medical tourism] phenomenon instead of encouraging it by espousing the slogan of ‘treatment at home is best’ and preparing the infrastructure for that.” Shaker cited “kidney failure, organ transplant, cancer, open heart surgeries, tumors, coronary artery transplant surgery and spinal deviations” as among the diseases considered difficult to treat in Iraq.”

The work of Preemptive Love Coalition intersects perfectly with these needs in Iraq. Together, we invest directly into the human infrastructure–into doctors and nurses who long to have the skills needed to fix complex pediatric heart issues right here in Iraq. These medical professionals know that it is possible to create effective heart surgery teams here, and want to eliminate The Backlog. They want to be part of a larger solution for their county.

We’re grateful that you are helping to make that a reality.