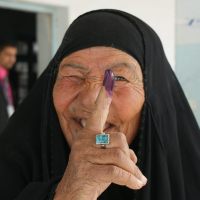 Over the weekend, Iraqis pressed inky fingers to paper once again to decide who will lead them into the country’s next chapter, post-ISIS—and there was a lot about this election that surprised.

First, it’s important to mention that this wasn’t an election for the head of state. Iraq has a parliamentary system of government. There are 329 seats in Iraq’s parliament. Some are reserved for minority groups (Yazidis, Christians, etc.), while the majority of seats go to whoever can get the most votes.

The party of Iraq’s current prime minister, Haider al-Abadi, was expected to win easily, a shoo-in. Abadi oversaw the defeat of ISIS in Iraq. He is a rare ally of both Iran and the United States. He’s known for taking hard stances on corruption, and many experts consider him a strong option for helping Iraq rebuild after the war.

The experts were wrong.

As of this writing, Moqtada al-Sadr’s party is leading in most provinces of Iraq and is expected to win the most seats in parliament. Sadr, a Shia cleric, is famous for his fierce opposition to the US occupation of Iraq after the 2003 invasion, as well as his opposition to Iranian influence in Iraq.

While Sadr’s party received the most votes, this election saw the lowest turnout since Iraq’s post-Saddam government was formed by the US-led coalition. The low voter turnout was discouraging but not altogether surprising. Many Iraqis perceive the government to be corrupt and generally beholden to one outside power or another (or all of them).

The sense among many is they aren’t voting for Iraq’s future as much as deciding who will have more influence over the country: Iran, the United States, or some other actor. Many Iraqis don’t feel their country is their own, so why vote?

On a more positive note, this election has been a clear win from a security standpoint.

If a bomb had gone off and killed dozens or hundreds in a crowded Baghdad square, the world would’ve just thought, “Same old, same old.” But it’s important to celebrate security wins and to acknowledge the absence of something: despite threats from residual ISIS terror cells in Iraq, there were very few attacks across the country during this election, and that’s something we’re grateful for.

It’s different from the means of choosing a government that many of us are used to, but there’s no doubt the alliances being formed now behind the scene will have a huge impact on the political scene for years to come.

In the midst of all that uncertainty, however, it’s important for us to say once again that our way forward is still clear.

Even now, we have a team preparing for travel and work all over the country, and we’re following the election results closely knowing the winner could have a significant say in our ability to continue this work you’re making possible in post-ISIS Iraq.

For now, we keep at it with you, working to rebuild and restore hope wherever we can, grateful that you’ve chosen to give yourself toward this work.

We’re with you as you’re with them. More to come.