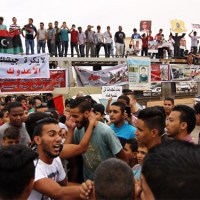 Peace at the diplomatic level can be gruelling.

Last-minute pleas from a variety of Western and Arab countries call for a deal, but yesterday was the deadline for Libya’s two rival governments to sign an agreement to form a single, unified government.

As of today, Libya does not have an internationally recognized government.

After the toppling and killing of Libyan leader Muammar Gaddafi, the country struggled to find it’s bearings. Two rival governments formed—an more fundamentalist-leaning government based in the west and what has been until now an internationally recognized government in the east.

The rivalry between governments sent the country into civil war, creating space for ISIS to move in and crushed the oil industry, which in turn devastated the Libyan economy. Revenue from the oil industry represented 96% of Libya’s total government revenue and 98% of export revenue.

Libya expert Jason Pack said “As of today, neither of those governments can claim legal legitimacy—making Libya the largest…vacuum of sovereignty, on earth.”

Western nations are prepared to withhold aid to Libya until the formation of a single government. For a country already poor and isolated, it creates a critical situation. Everyday Libyans already feel that their government(s) are against them, serving their own interests. The last thing they need is to feel the rest of the world has also abandoned them.

Your support makes peaceful intervention possible in places like Libya, where our partner doctors have already saved hundreds of lives and invested countless hours of hands-on training for locals—and we aren’t stopping!

As long as we can help in Libya, we will help.

In a press conference held today in neighboring Tunisia, UN envoy Leon affirmed the talks will continue and the peace plan will stay on track, but there may be sanctions levied against individual politicians who hold up the process.

A single, unified government in Libya is seen as necessary before ISIS can be defeated there and before the flow of refugees into Europe from Libyan beaches can be stopped.