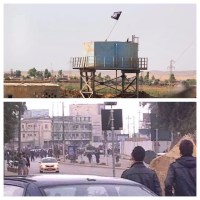 Last week, ISIS fighters launched an attack from the south of Kirkuk, one of Iraq’s most oil-rich and disputed cities. We had people delivering supplies to displaced families just miles away during the attack.

Thankfully, our people made it safely out of the city and none of our families were injured. Casualties and deaths of ISIS and peshmerga forces vary depending on your news source, but everyone agrees on one thing: this isn’t over.

Kirkuk will continue to be a fault-line city hotly contested between the three major players: the majority Shia Iraqi government, the Kurdish region now controlling most of Kirkuk, and the ISIS extremists.

But behind each headline about a bombing or gun battle, unknown to most, there are families trudging away from homes, hoping to find safety. These people receive no headlines and rarely even get mentioned. They are a by-product of war, not nearly as attention-grabbing as the actual fight. Drill down even further, and the well-read know of Yazidi and Christian persecution in Iraq, but the most under served populations here are the Arabs, both Sunni and Shia, and they are the people you’re helping us reach with essential aid.

That’s why we’re going back as soon as things are calm enough. We aren’t giving up on them or on Kirkuk! More to come…