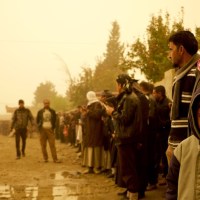 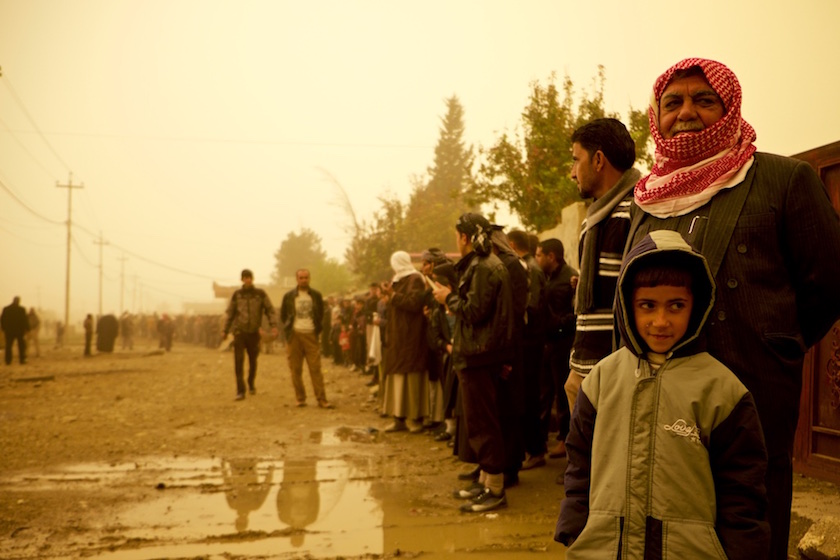 Thousands of people will eat tonight because of your giving and the work of our delivery teams. But making it happen wasn’t easy.

Around 7:00 this morning, our team headed west toward Mosul—two large semi trucks with food and other essentials and several small cars. We stopped for finalize a few plans and make some phone calls. Everything was prepared. Families were waiting.

We made it through each checkpoint and ultimately arrived in the small Mosul suburb. We were inside the Mosul front lines—so close, you could walk to the city itself. 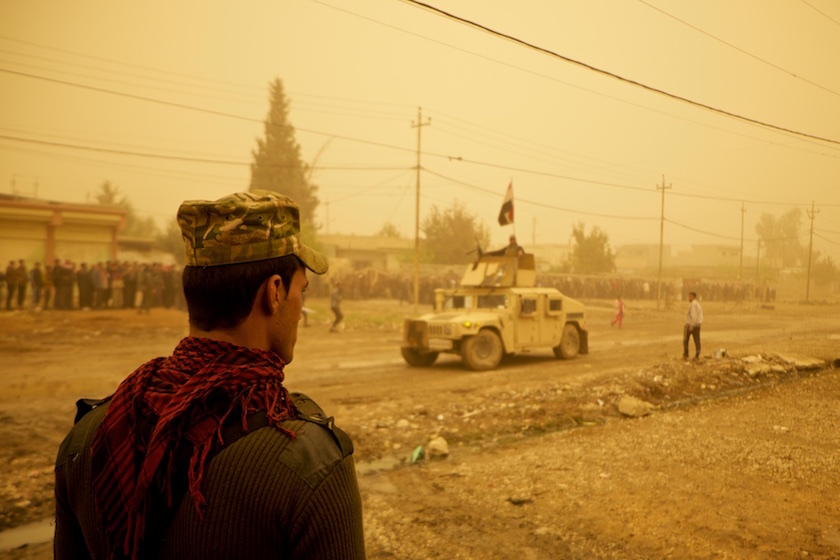 The Iraqi army told us to wait a few minutes before beginning our delivery, so we got out to spend time with local families. Just as we were talking with a father and son waiting in line for food, there was a loud CLANG… CLANG-CLANG-CLANG.

The sound of bullets hitting metal. Hundreds of heads immediately ducked. A few people dove into the mud.

We ducked down and hustled back to the cars, hugging up against the walls of a nearby house. Realizing the area was still too dangerous to deliver aid out in the open, someone offered to let us use their home instead. We backed our trucks full of food into the large, walled-off carport and began the delivery. Families shouted with excitement as they walked away, each carrying a month’s supply of food.

One elderly man said excitedly, “We were sure nobody would come to help us, especially not so soon after being freed!”

It’s surreal to see the ISIS flags spray painted on the wall, just a few feet from our banner announcing in Arabic, “Godspeed Beloved Mosul.” 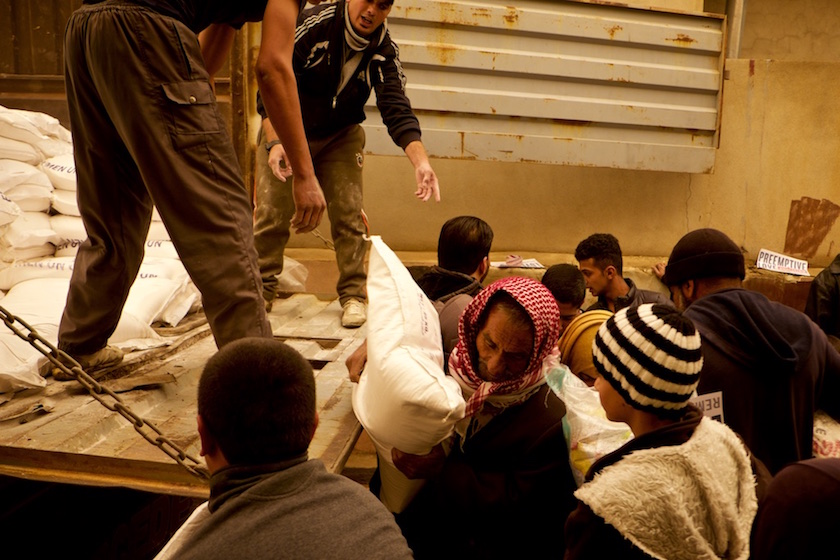 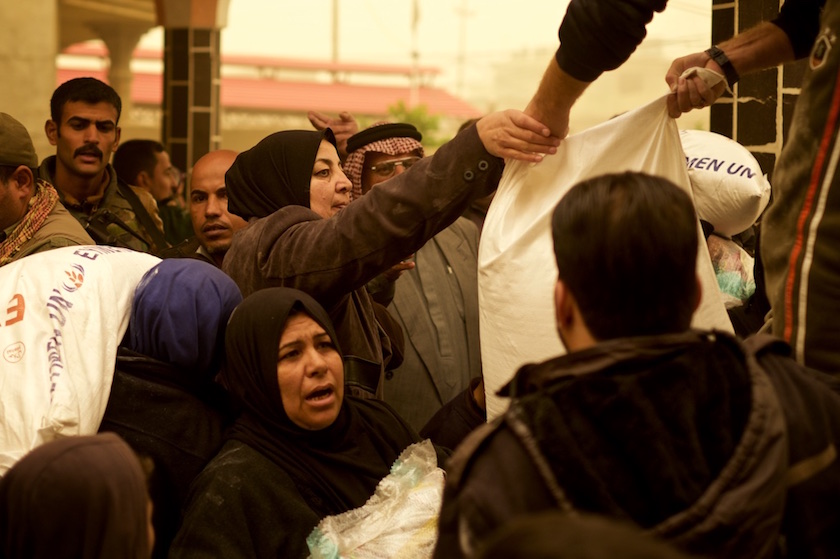 But the home where we handed out food didn’t provide total safety. All around us, soldiers responsible for our security grew more and more restless. One of them said, “You know the front line is less than a kilometer away.”

He pointed over my shoulder.

“There are people fighting just a few houses in that direction.” 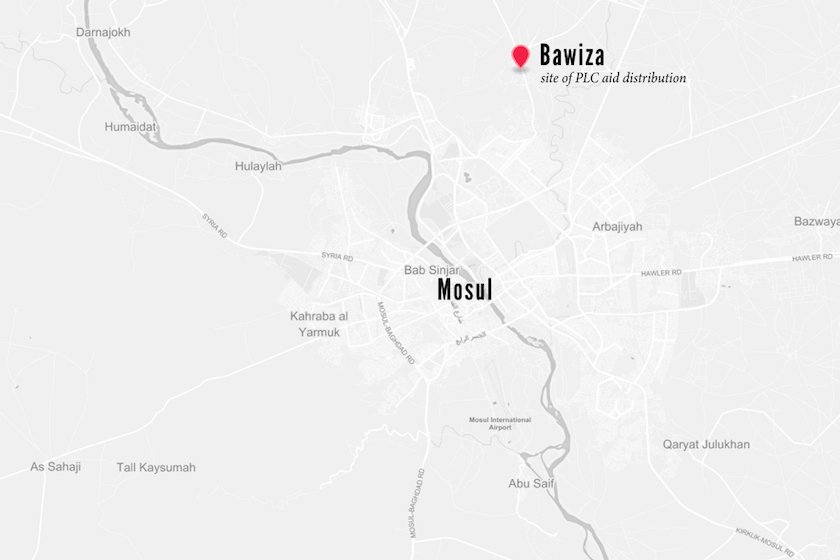 Every few minutes, a mortar shell could be heard landing somewhere in the town. Then another. And another.

Soon it became clear: the mortars were hitting closer and closer to our location. The local security forces were convinced ISIS was targeting us.

The last mortar struck so close it knocked someone near me to the ground. It was a deafening sound, hitting just a few houses away from our position. Bits of glass and cement flew, people screamed, and that was it—we packed the trucks and fell back to another town. 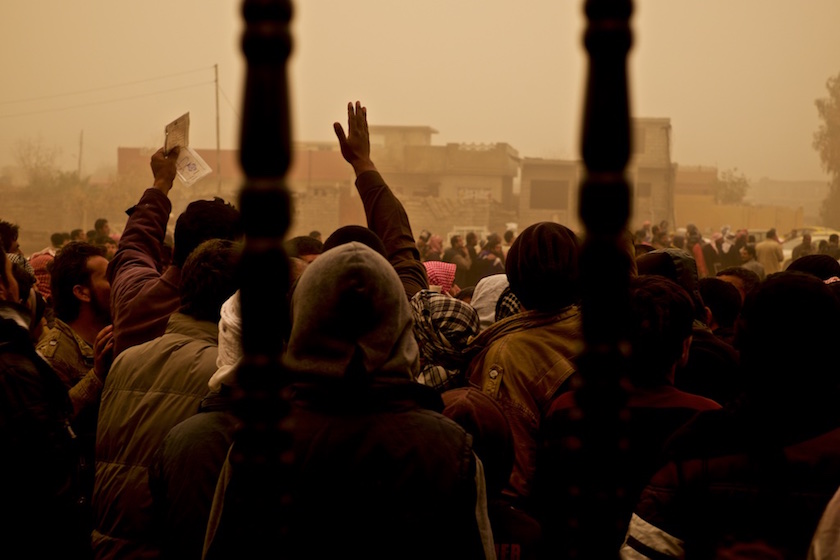 Here, the sound of mortar shelling was less frequent and certainly further away. But the families in this new location were even more desperate. People swarmed our trucks—begging, shouting, crying.

One woman pushed her baby toward me and said, “Here, take it.”

Fighting broke out, and it became clear the army would have to use force to maintain order—something we wouldn’t allow. The desperation in people’s faces was heartbreaking. But after serving a few hundred families, we had to move on. Desperation was turning to violence, and there was only an hour of daylight left. Once darkness falls, the front lines become even more dangerous. 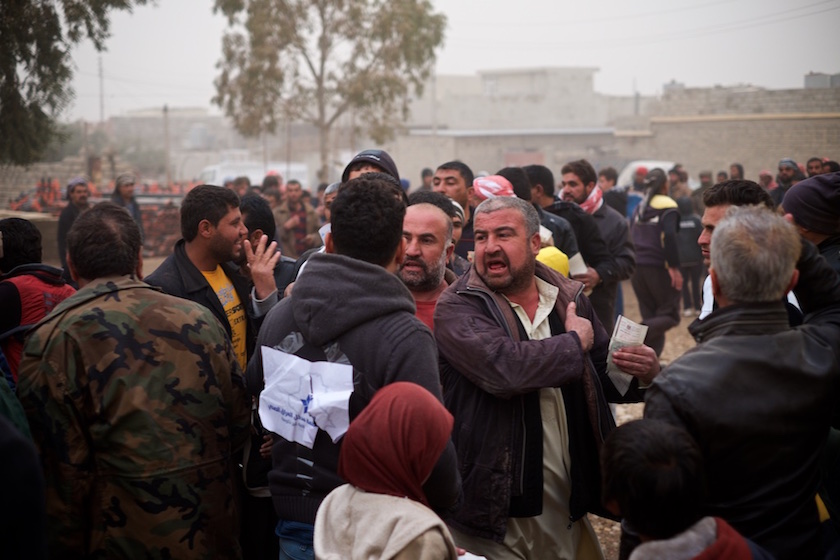 On our way back, we stopped at a small village to hand out the rest of the food you provided. But it was the same situation here. Fathers were climbing up the sides of our truck, begging us not to leave.

A mother kept shouting, “We’re starving here. Are you coming back?”

Several men began shouting at one another and came to blows just as we left.

And now, as our team sits in the car driving home after an emotional day of chaos, we all agree without hesitation:

It was worth it. This is where we need to be.

If we are going to be the people who go where others won’t to love those others won’t love, then we have to be ready to face desperation like this.

Send lifesaving food to Mosul. $65 can feed a family for a month.