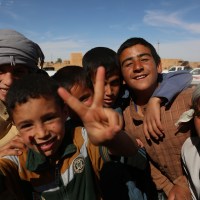 Kathy Kelly*, has devoted most of her life to making peace. A three-time Nobel Peace Prize nominee for her activism, Kathy has participated in almost 30 peacemaking missions in Afghanistan. She was a founding member of Voices in the Wilderness, and from 1996 to 2003, brought food and medicine to Iraqi citizens in deliberate violation of UN-imposed economic sanctions and witnessed the “shock and awe” bombardment of the 2003 invasion. She has protested nuclear missile silo sites, the bombardment of Yemen, the occupation of Gaza, and the US drone policy in an effort to stop the spread of violence.

Over Kathy’s life, she has come to believe, as we do, that peacemaking requires community and livelihoods. When people feel like they know one another or share bonds, they are more likely to act in concert and look out for one another and their shared interests. Having a sense of community builds trust and encourages mutual cooperation. Livelihoods not only ensure that people will be able to provide for their loved ones while maintaining their personal dignity. They also encourage a sense of accomplishment, agency, and accountability when people contribute to the betterment of their communities through their livelihoods. Livelihoods give people a claim to the space they inhabit and another incentive to live peacefully. With this shared belief, we sat down with Kathy over Zoom and talked about how to wage peace in this period of unabashed militarism and exacerbated violence.

Lesson one: Become literate in the stories of war

“Stories are the number one way to grasp our realities.” Kathy observes there was more coverage on Afghanistan in the weeks leading up to the Taliban takeover than there has been in the last twenty years. “Seventy-five percent of Afghanistan’s population is women and children, hungry women and children.” Kathy argues that if people heard stories about families displaced by violence, killed by drones, or how militarism leads to corruption (for example, how warlords have taken over livelihoods, leaving most young people unemployed), we’d better understand the consequences of war, and we’d protest it. Instead, mainstream media normalizes war with its coverage.

Kathy reflected on the January 6 attacks on the US Capitol, specifically on how President Biden said this attack was not who the American people are, and people wanted President Biden to be right. “Americans don’t see the menacing aspects of US militarism in other countries. When they do see it, they don’t like it.”

Watching the documentary film Night and Fog, which featured Nazi concentration camps and the horrors of war, was a defining moment on Kathy’s journey from teacher to peace activist. Seeing the very real and very graphic evidence of genocide made her vow never to be an onlooker in the face of terrible evil.

As a high schooler, Kathy looked up to Fr. Dan Berrigan, anti-war activist. Father Dan advised to “speak clearly and pay up personally.” When Kathy realized she was being an onlooker in the face of the Vietnam War, she was “propulsed into protesting.” Some of her first acts to “pay up personally” included volunteering in soup kitchens and homeless shelters in Chicago’s uptown neighborhood, going on hunger strikes, planting corn on nuclear missile silo sites, spending time in federal prison for her activism (which she fondly calls her “finishing school,)” and voluntarily receiving a salary below the base income tax threshold so that she would never pay taxes that would finance war.

Lesson three: Choose to give water instead of protecting weapons

To protest nuclear armament, Kathy and other peace activists fanned out over a nuclear missile silo site to plant corn on top of it. As she finished, she was approached by an armored vehicle carrying 4 soldiers, who quickly handcuffed her and ordered her to kneel.

After three of the soldiers left, Kathy, while looking straight ahead and not at the man guarding her, babbled, “This is who we are, this is what we did, this is why we did it…Do you think the corn will grow?”

“I don’t know ma’am, but I sure hope so.” A few moments later, the soldier offered her a drink of water. “Please tip your head back ma’am,” he said before he used both hands to squeeze water from his canteen down Kathy’s throat.

Throughout this exchange, Kathy kept her eyes facing forward. She reasons he must have put down his weapon or let it hang unguarded by his side in order to pour the water into her open mouth. That this soldier risked doing something so kind for a complete stranger—to give water instead of protecting a weapon—guided Kathy’s action years later. She and other activists greeted the US marines in Baghdad with dates and water during the Shock and Awe bombardment. “We don’t know what they’ve been doing before they got here, but they do look pretty thirsty,” she recalled thinking before she brought the marines some refreshments.

“What would happen if governments chose to give water over protecting weapons?” Kathy asked, knowing that peace is made in the streets.

Showing kindness to others who hold different points of view makes space for people on all sides to press in and hear one another.

Lesson four: Listening is the key to relationship-building

Once a month for the last ten years, young friends in Afghanistan who, for security purposes, ask not to be named, have held a monthly Skype call where anyone, anywhere, can tune in. They do this because they believe–as we do–that listening is necessary for cultures to relate. For example, they have hosted events where teens with Hazara heritage (a minority ethnic group in Afghanistan) learned dances of the Pashtun people (a majority ethnic group which has often persecuted the Hazara people over more than two hundred years of conflict). The two groups learned how to play the other’s musical instruments. Together, they work to overcome the idea of separating borders by wearing sky blue colored scarves which symbolize how we all live under the same blue, borderless sky.

Kathy remarked that whenever she goes on a peace mission in Afghanistan, she is cautioned to “leave her religion at the door.” Instead, she found working alongside the Afghan Youth Peace Volunteers to be like “walking into an embrace of some of the best ideals of faith, sharing, service, and loving enemies.”

The talks that President Trump initiated to end the US military engagement in Afghanistan dealt with troop withdrawal but not peacemaking. No provisions were made to rebuild communities or livelihoods. Families everywhere want to put food on their tables, have access to clean drinking water, and live in safe neighborhoods to take better care of their children. To do that, families and communities need jobs.

Afghanistan’s landscape is scarred by war and littered with explosives and weapons. The Kabul River has dried up, its riverbed littered. Refugee camps lack latrines, schools, and durable housing to withstand winter rains, snow, and mudslides.There is plenty of work to be done.

Afghanistan is also a nation with a young workforce capable of doing jobs other than pulling a trigger. The Taliban had the Kabul airport up and running quickly after the US troop withdrawal, showing they have the knowledge and skills to rebuild communities, which will create livelihoods.

“Practice, practice, practice,” was Kathy’s advice on how to stop making fear-based decisions. Specifically, she practices finding the courage to control our individual fears in different settings. “We need to learn how to recognize when we are controlled by our own fears, the fears of our loved ones, or society’s fears.” In this way, we will recognize we belong to each other.

“We need to develop societies that don’t act like big, scared children. During a certain period before the 2016 election, Stormy Daniels [an adult film actress who publicly disclosed an alleged affair with President Trump before he was elected to office] was mentioned 5,230 times on cable TV while Yemen [a country at war for two years in 2016] was mentioned five times.” Kathy argues that our preoccupation with sports, entertainment, and shopping drives a news cycle which fails to report on militarism, violence, and corruption, which keeps us illiterate in the stories of war.

The war in Afghanistan isn’t over, but it has changed as the US expands its over-the-horizon attack capabilities. Our outdated solutions emphasizing militarism do not help us, especially those of us who bear the brunt of war. Peacemaking requires emergency relief, sustainable livelihoods, and communities built on relationships because we belong to each other. Join us in our commitment to stopping the spread of violence.

*Although Kathy Kelly’s passion for peacemaking aligns with Preemptive Love’s, Ms. Kelly is not a partner with our work in Afghanistan.