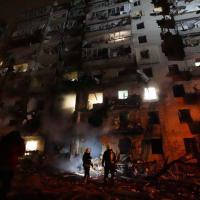 Like many of us, Jen, a peacemaker, woke up yesterday to the news that Russia had invaded Ukraine by land, sea, and air. For many of us, the initial shock jolted, followed by tremors of fear and an overwhelming sense of dread. Jen wanted to support people suffering the violence of war but wasn’t sure how. Currently in Minnesota, she took some tea, traditionally drunk instead of coffee in Ukrainian homes, down to the Ukrainian American Community Center in Minneapolis, where tea drinking is a familiar, social tradition. Unfortunately, due to the Covid-19 pandemic, no one at the center touched her tea. Jen reflected on her failed attempt to come alongside Ukrainians in solidarity, saying, “We don’t know what to do, but we’re going to try.”

From the safety of our homes, far away from conflict, many of us don’t know what to do to show support for Ukraine while we hope for a swift end to the conflict. When asked what can be done to help Ukrainians, Natasha*, a doctor in Kyiv, wants the outside world to spread “the real information.” Due to the Russian government’s  disinformation campaign, “not everyone believes what is really happening and how awful the situation is.” Natasha reports that many people are dead, and lots of buildings in Kyiv have been destroyed.

Nikoli*, an IT worker also living in Kyiv, sees less violence as he lives in a more residential section of the city, with little strategic infrastructure to target nearby. People have been advised to stay inside for their own safety, which Nikoli does unless an airstrike starts. He checks Telegram, a cross-platform, cloud-based instant messaging service, to know if it is safer to stay at home or if he and his family should move to a bomb shelter. Last night, they napped in their home but left for a nearby bomb shelter shortly before 8 am this morning. He had heard a siren on a different side of Kyiv, but “you can’t rely on the accuracy of a bomb strike, so you’d better hide.” They stayed at the shelter until almost noon.

Most of the bomb shelters are in either underground stations (the Arsenalna metro station in Kyiv’s city center is the deepest in the world, at 346 feet underground) or in root cellars of apartment buildings. Nikoli and his family first tried to use the “root-level service space” but it was uninhabitable due to high humidity and poor sanitary conditions. They went into a modified sauna facility, which was a root-cellar space with a working ventilation system and insulation to keep people warm. These spaces can get crowded, but many of the people know each other because they have been living in the same building for years.

Nikoli and his family do not stay for long in the shelters, so food or water scarcity has not been an issue yet. They luckily still have water and electricity in their apartment. They can also go to their apartment to take a shower and then return to the safety of the shelter. Because the curfew in Kyiv is from 10:00 pm to 7:00 am, if they were to go to a shelter in an underground station, they would have to stay there until the curfew is lifted. Natasha and her family stay at home, having created a safe space in their home’s bathroom.

Going about your daily life through the siege of a capital city generates a thousand tiny questions which take on monumental significance. Should I sleep or just nap? Should my family members and I sleep in shifts? Should I move that table to a different corner of the room, further away from the window, in case there is shelling? Should I leave the house? How far should I go? What is the best time to go? What if I am outside and shooting starts?

How does a civilian prepare for war?

Nikoli has been prepared since 2014, when Russia annexed Crimea and invaded the Donbas region in eastern Ukraine. He has stores of fuel, food, and batteries as part of his “emergency package” because he, like many other Ukrainians, believed the warnings of an impending Russian invasion “even when our own government denied it.” He says Ukrainians are angry; they want to be free, and they are ready to fight. He declined to answer when asked if he has a weapon in his home.

Because he is not near important infrastructure, Nikoli does not hear constant sirens or gunshots. However, on Friday, midday, he did hear shots fired close to his home. Russian infiltration groups were cutting through his neighborhood, trying to reach the city center. Some were disguised as the local army while others were disguised as citizens.

In a separate incident, Nikoli reports that an infiltrator ran his vehicle into a civilian’s car. Natasha had a copy of the video footage, shot from a nearby apartment window. In it, a lone car slowly coasts along an otherwise empty street. Suddenly, a bigger car comes from the opposite direction and purposefully swerves into it, flipping the smaller car. The person taking the video gasps in horror. “People don’t get the essence of violence until it happens to them. They have a general understanding, and they think they can sympathize. But you can’t fully understand it, feel it, until it happens to you,” Nikioli argues.

Another warning siren goes off and Nikoli has to go. He needs to gather his family and get to a shelter.

While many of us will never experience the type of violence Nikoli, Natasha, and their countrymen are facing, we still have agency in this situation. We can be part of the solution, no matter where we live. Take the time to have a thoughtful conversation with a friend; take the time to show up in your local community in support of those hurting.  With each small act of preemptive love, we can help stop the spread of violence.

*Names have been changed to protect civilians living in Kiev.