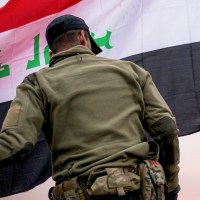 I can’t stop thinking about the words of an Iraqi soldier describing his orders during the final days of fighting in Mosul:

“We killed them all—ISIS, men, women, children. We killed everyone.”

I was there as the battle for Mosul drew near a close. I’ve met many of the soldiers who’ve fought here. My colleagues and I have stood in the Old City, the heart of Mosul, where some of the fiercest fighting has taken place—and where some Iraqi forces are now accused of committing war crimes.

Here’s what we have seen.

We’ve seen soldiers using knives to prod civilians in the back. These people already endured three years of hell under ISIS and nine months of terror as the battle for Mosul raged. Now some of them have been forced to endure humiliation and abuse at the hands of their liberators.

We’ve seen soldiers beat women and men with sticks as they waited in line for food. The soldiers may not have always struck hard enough to leave a physical wound, but it was hard enough to bruise a person’s dignity. Hard enough to say, “You don’t belong here anymore, and I can treat you any way I like.” I personally intervened a number of times—pulling a soldier’s arm down, putting my own arm around his shoulder, even hugging him. Anything to get him to stop. I pleaded with his commanding officer to do something. But each time, after a brief lull, the violence resumed. Before long, those being struck began to strike others. Violence begets violence.

We’ve seen the mosques where men and boys are held who’ve been accused of joining ISIS. Guilty until proven innocent. It is a poorly kept secret what goes on inside these mosques—and if true, it is no less a desecration of sacred space than what ISIS did here.

We’ve seen extraordinary acts of courage and compassion, too. We’ve seen Iraqi soldiers risk their safety to bring us close to the frontlines so we could deliver food to families caught in the crossfire. I saw a command sergeant major cradle a 2-month-old baby while her mom was cared for at a military medical station, moments after the family was rescued by Iraqi forces.

You won’t find a simple “good guy vs. bad guy” narrative in Mosul. But what’s been taking place here in the final days of fighting… it turns my stomach.

Iraqi soldiers were given the order to “kill anything or anyone that moves.” It doesn’t matter whether adult or child, man or woman, young or old. Militants who surrender are stripped naked, dragged through the streets, and executed. Iraqi soldiers have been filmed throwing prisoners of war off buildings and shooting them. These are not merely cases of mistaken identity in the heat of battle. They’re a horrific display of bravado—cold, calculated slaughter.

This is not victory. This is how we become the monster we set out to defeat.

I understand why soldiers are on edge. Iraqi forces have paid a heavy price to liberate Mosul. According to some estimates, 75 percent of Iraq’s elite counterterrorism forces were injured or killed in the battle for east Mosul, leaving the much harder, bloodier battle for west Mosul to be fought by less well-trained forces.

The people who fought and died to free Mosul are heroes in so many ways.

But somewhere along the way, the line between “enemy combatant” and “civilian” became blurred. As the battle drew near a close, it disappeared altogether.

More than one soldier has said this to me as we’ve brought food to families inside Mosul the last few weeks.

“Don’t go to that neighborhood. Don’t serve those people. They’re all ISIS.”

They told us that everyone left in Mosul was with ISIS. They used this claim to justify the way they were treating people. But when a soldier confessed who he had killed—and what orders he’d been given—a different story emerged.

They knew there was a difference. They knew they were not all ISIS. And they killed anyway.

This is what happens when you dehumanize your enemy, when you turn everything into “us versus them,” when you are willing to marginalize and otherize those who are different from you.

Once you tell yourself “they’re all ISIS,” it’s not that hard to say, “Kill everything that moves.”

This is not just about what some Iraqi soldiers are alleged to have done, either. Coalition planes have struck thousands of targets in Mosul and in Raqqa in neighboring Syria. Since January, the number of strikes has increased dramatically—and so have the civilian deaths.

In the final days of the battle for Mosul, Coalition forces launched 20 airstrikes per day on an area barely half a square mile in size. Under circumstances like this, the very notion of precision—the ability to distinguish between “enemy combatant” and “civilian”—is rendered meaningless.

But this is not victory. These actions only pave the way to more extremism—to the next ISIS. Violence begets violence.

Remember, ISIS did not rise to power in a vacuum. ISIS fed on the grievances of marginalized communities in Mosul, Fallujah, and elsewhere. If “liberation” from ISIS looks a lot like oppression—if it looks like whole neighborhoods being razed and civilians gunned down without a thought—then you can be sure this won’t be the last of it.

The only way to break the cycle of violence is to love anyway.

Love doesn’t mean handing out hugs and candy to terrorists. But it must, at the very least, mean that we resist our own animal instincts for retribution.

Love demands that we remember our shared humanity. It challenges us to see the person they used to be before they were corrupted—and the possibility of who they could be, in spite of their crimes, if justice is restorative and not merely retributive. Love upholds the presumption of innocence that also protects me and my family from abuse. Love looks to the future we can build, more than it dwells on the past we’ve lost. Love holds onto “the more beautiful world our hearts know is possible” and humbly accepts that it cannot be achieved by revenge.

I know it’s complicated. I know it’s messy. After three years of seeing this war play out on my doorstep, I don’t know how to respond to a threat like ISIS without military action. The easy answers of pure, undiluted pacifism are not so easy for me anymore.

But violence cannot prevent the next ISIS. We cannot bomb our way to peace. We cannot kill our way to the more beautiful world. Eventually, someone has to lay down their arms and risk everything that comes with it. Someone has to let the process play out. Somebody has to accept that it’d be better for a guilty person to go free than an innocent person to suffer wrongly.

Only the hard work of reconciliation can bring the more beautiful world into being. This work can only begin when we learn to see our enemy as human, when we start valuing the lives of “the other” as much as we value our own, and when we our more willing to lay down our lives than we are to take someone else’s life.