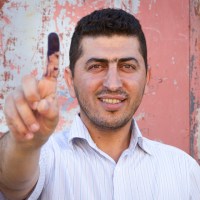 In just a few days, people in the Kurdistan region of Iraq will vote on whether they want to become their own country, separate from Iraq. While a “yes” vote will not mean immediate independence, it could have far-reaching consequences. Iraqi officials are calling for the referendum to be suspended, and tensions are already growing in the region.

For many of our staff, this part of the world has been home and a base of operations for over a decade—we love Kurdistan. But like most things here, nothing is simple, and the complexities beneath the surface of this vote play an important role in the work you are making possible across the Middle East.

Here are five key things for you to know leading up to the vote:

1. Kurds were promised a nation of their own a century ago, but lost out at the eleventh hour.

After World War I, the French and British carved up the former Ottoman Empire, drawing borders that benefitted their own countries and economies, while largely ignoring local ethnic, religious, and tribal lines. The Kurds were assured a “Kurdistan” of their own, but in the final draft of the Sykes-Picot agreement, no such country was put in place. Kurds have never forgotten this—and many still point back to this as a betrayal by the international community. They are still dreaming of the day they will have a nation of their own.

There are an estimated 30 million Kurds in the region, mostly spread out between Iraq, Syria, Iran, and Turkey. The Kurds voting for independence next week are Iraqi Kurds, numbering between five and six million people.

That’s the simple version of what’s going on. While most any Kurd would tell you they want an independent Kurdistan uniting all Kurds into a unified nation, that’s often where the shared dream ends. Kurds disagree fiercely among themselves over borders, who should be in power, what kind of government they should have, who their true allies really are, and on and on. People in Kurdistan joke that, for every one Kurd you meet, you’ll get three different opinions on how things should play out politically.

To read more Kurdish history, check out the Wiki page here, or go even deeper with these books: “A Modern History of the Kurds” and “The Kurds: A People In Search of Their Homeland.”

2. None of Iraqi Kurdistan’s neighbors are on board with an independent Kurdistan.

Turkey, Iran, Syria, and the rest of Iraq have all said they do not support an independent Kurdistan. If the Iraqi Kurds vote for independence, and if their neighbors cut ties and close the borders, they could be surrounded by ambivalent or even hostile forces on all sides. The Kurdish region of Iraq is entirely landlocked—they would depend on their neighbors for any kind of economic stability.

With a struggling economy and already fragile political alliance between various Kurdish political parties, the kind of pressure created by independence could be too much. Recent agricultural studies have indicated that, if every border access point were cut, Iraqi Kurdistan would probably only have four to eight weeks worth of food in reserve before people started going hungry here—and the first to suffer would be the poorest and most marginalized, like the refugees and displaced families you’ve been serving.

It’s not just Kurdistan’s neighbors who aren’t on board, either. The United States—a key ally of the Iraqi Kurds—and the United Nations have also said they will not support an independent Kurdistan. This has led many to wonder how things would change in the region with almost no recognition of the vote. So far, only Israel has said it would support Kurdish independence from Iraq.

At present, it seems there would be very little administrative change if the Kurds do vote “yes” to independence. Much like Somaliland in Somalia, they would become a self-proclaimed independent state recognized by (almost) no one.

3. Baghdad is willing to use force to “keep Iraq united.”

For many political leaders in both Baghdad and Erbil, Iraqi Kurdistan’s capital city, the dispute is less about the actual referendum and more about the Kurdish military presence in disputed territories like Diyala, Khanaqin, and the coveted fault-line city of Kirkuk. While fighting ISIS, Kurdish forces have extended their control over territory claimed by the rest of Iraq.

Iraqi military and paramilitary forces have reportedly moved into positions closer to these volatile areas, and our Kurdish friends in Kirkuk are reporting that weapon and ammunition sales are skyrocketing there. One friend told me, “Don’t visit Kirkuk right now. Ammunition shops are emptied out, and everyone has their guns loaded and ready for a fight.”

Meanwhile in Baghdad, Iraq’s parliament voted to give its prime minister full authority to do “whatever is necessary.” In response, the Kurdish president is doubling down, saying the referendum will happen on schedule

4. Neighboring countries like Turkey and Iran may also intervene.

Turkish forces are reportedly performing military exercises along the Iraqi border and have threatened to intervene in the interest of the Iraqi Turkmen minority, a group culturally and ethnically related to the Turks.

To the east, the Iranian government is thought to be preparing for a more characteristically quiet form of engagement, possibly through the militias they’ve supported in the battle against ISIS in Iraq.

5. Conflict between these communities will be a gift to terror groups like ISIS.

ISIS gave rival groups a common enemy. For the past three years, Kurds, Arab Sunnis, and Arab Shias of Iraq have been able to focus on a common goal, on the surface, anyway: defeating ISIS. But it quickly turned into a competition for who could take more land from the extremists, and the Kurds were the unquestioned winners of this contest by far. Kurdish forces gained control of significant new territories after the Iraqi military fled ISIS, and then again after the Peshmerga managed to wrest significant portions of the disputed territories from ISIS over the past few years.

But with guns now turning away from ISIS and toward one another, there’s little doubt it will give ISIS a chance to recover after losing massive amounts of territory in Iraq. The loss of Mosul was a blow to the extremists, but they are by no means dead in the region. They have shown themselves capable of wreaking havoc at a moment’s notice, even with very few soldiers.

So what does all this mean for the work you’re making possible in Iraq and Syria? As checkpoints tighten or close altogether, it affects our team’s ability to access areas of acute need with medicine, food, and water. It creates heightened sectarian tension and threatens the unity we’ve promoted for over a decade. But we don’t give up that easily.

With your help, we will do what we’ve always done: promote peace between communities at odds in whatever we ways we can. As I write this, there are Iraqi Kurds and Arabs sitting side by side in our office, imagining new ways to serve refugees in their community. We have always leaned into conflict with love, because that is the only real response to the sickness of war. And we always will.

In highly volatile situations like this, many will ask which side we’re on. Are you for the Kurds or the Arabs? Are you pro-Palestinian or pro-Israeli? Are you Democrat or Republican?

But this “us vs them” way of thinking is false. We can be on both sides at the same time without being wishy washy. We don’t have to choose a side, because we choose all sides, because we refuse to give up on the wild vision for the world that says everyone can enjoy the peace, wholeness, and justice they deserve. We work for that day, and we’re grateful you do, too.