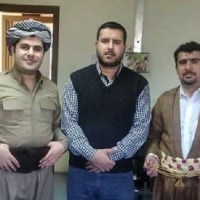 Almost every night, Ghazwan Ahmad’s relatives in Baghdad get in touch. Are the Kurds attacking you? they ask. How are they treating the Arabs up there?

Every time he hears such questions, Ahmad, 30, says he gets a little shock.

“The things my Kurdish brothers do for me are the same things that my real brothers would do,” says the young Arab, who came to live in Iraqi Kurdistan around four years ago. “We live here together in peace and the sorts of hate speech that we hear about on TV, those are just rumours and accusations. I feel safe here,” Ahmad concludes.

His relatives are concerned because of the recent referendum on Kurdish independence. On September 25, the semi-autonomous northern region of Iraqi Kurdistan voted “yes” to independence, signaling that they believe their region should secede from the rest of Iraq.

Sure, there are people from both sides who sometimes resort to threats. But ordinary citizens just want to get on with it. The hatred comes from the politicians.

There have been political tensions, with leaders in both Baghdad and Iraqi Kurdistan, trading insults and accusations. Locals have also felt those tensions and there are stories of beatings and arguments on the street, alongside the usual uproar on social media. For example, one can find videos of either side burning the other’s flags online.

There are also thousands of Kurds, both Sunni Muslim and Shiite Muslim, living in other parts of Iraq and an estimated 1.6 million Arabs—many of them displaced by the war against ISIS—currently residing inside Iraqi Kurdistan. As propaganda and passions erupt around the issue on both sides, there are fears that the different ethnicities might turn on each another.

“There have been some tensions between the two groups as result of the referendum,” admits Iraqi Kurdish journalist, Hiwa Osman. “This would be a very serious issue if it went any further, especially given the large numbers of Kurds living in Baghdad and the number of Arabs in Kurdistan.”

This is part of the reason why, in mid-September, Osman started a campaign on social media using the hashtag #Kurds&Arabs.

It started with Osman’s own snapshot of himself posing with an Arab friend. “A lot of people shared it on social media and the way they reacted shows that politicians are pretty distant from the ordinary people, who want peace, not war,” Osman suggests.

Other Arabs and Kurds followed suit, adding their own buddy pictures to the online pile.

“This is a very serious issue and there are fears it could lead to a civil war,” concedes Saad al-Matlabi, a senior Shiite Muslim politician in Baghdad. “But ordinary Kurdish citizens in Kurdistan are not responsible for the attacks on displaced Arabs,” he said. “There are political parties and political people standing behind those attacks.”

Al-Matlabi says that anybody attacking Kurds in areas controlled by the federal Iraqi government will be punished and that the Kurds will be protected.

The same sort of attitude is expressed by senior Kurdish officials up north.

“Our position is clear,” asserts Hoshyar Sewali, the head of the foreign relations office for the Kurdistan Democratic Party, or KDP. “We are not against Arabs. We are against those who are in power in the central government. We don’t have any problems with the ethnic group, we have problems with the politicians in power.”

Even Massoud Barzani, the head of the KDP and a prime mover behind the referendum, says tensions between the Arabs and Kurds living in Iraqi Kurdistan are not acceptable.

In Iraq, politicians have often whipped up support for their own plans and mobilized opposition to others’ plans, without regard for the safety of the general public or for the ethnic/sectarian problems they may cause. This kind of thing has been going on in Iraq since 2003, and even earlier.

“These kinds of actions [like the social media movement #Kurds&Arabs] show that ordinary people think about, and care about, coexistence more than their political leaders,” Nawzad Pouls Hanna, an activist working on improving coexistence in Kurdistan explained. “The evidence for this is that thousands of Arabs are still visiting Iraqi Kurdistan and Kurds live side-by-side with Arabs in many areas controlled by the federal government.”

Ismail, a 40-year-old Kurdish resident in Baghdad, agrees. He teaches in the Kurdish language department at the university in Baghdad and he goes there every day without any worries.

Ismail says he doesn’t have any concerns that Arabs dislike, or even hate him. “Sure, there are people from both sides who sometimes resort to threats,” he admits. “But ordinary citizens just want to get on with it. The hatred comes from the politicians,” he concludes.