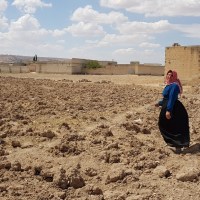 We’re digging in. We need you to dig in with us.

Sometimes war creeps up on you.

Shaali wasn’t bothered much by the years of war in Syria. She is a country woman used to an inconvenient life. Shaali raised a big family in a village in the Aleppo countryside. She shook off the difficulties of war the same way she shook off most other hardships in life: by staying focused on her family and the land she cultivated.

Shaali was able to stay disengaged from what was happening around her until war crept up to her doorstep. Family members started disappearing—taken and not seen again. It not only broke her heart, but broke her spirit.

Shaali very nearly gave up on life. She stopped working her fields, and the land that once provided for her needs became barren, deserted. She used to be one of the leading vegetable growers in the area; known as “the woman with green hands”. All that changed under the weight of trauma and grief.

The loss of her family member—like so many in Syria, Shaali doesn’t know if they were killed, kidnapped, imprisoned, or something else—caused her heart to become as dry as her neglected fields.

She didn’t even have tears left to cry.

Before years of drought, then war ravaged the Aleppo countryside, it was a successful agricultural area. Violent attacks, the end of water flow in canals that irrigated fields, and the fear that goes hand-in-hand with war turned productive fields into vast stretches of empty, dry earth. This decimated the local economy, and coupled with the direct impacts of war, created a local unemployment rate of 85%.

Unemployment is one of the lesser known, brutal realities of life in a country at war.

Two years ago, war in rural Aleppo shifted to other parts of the country, making it possible for farmers to return to their fields. In time, Shaali’s grief shifted too, making it possible for her to step back into the role of provider for her family. But between crippling war-time growing conditions, and her own anguish, she missed out on enough harvest seasons that she simply didn’t have the money or supplies to resume farming.

The only thing keeping Shaali from returning to work was the use of a tractor and some seeds.

Somehow, impossibly to Shaali, hope began entering her life at exactly the right moment. It came “out of nowhere,” as Shaali tells it, in the form of a shared tractor to break up the parched soil, and zucchini seeds to plant—exactly what she needed.

Zucchini is a popular vegetable in Syria, simple to grow, resistant to droughts like the one that helped plunge Syria into war, and robust to harvest and transport. It’s the perfect choice to allow Shaali to return to her fields.

With every seed she pokes into the ground and waters, Shaali has life replanted in her soul. “It’s like life was introduced to a dead body,” she explains, “a little tiny white light appeared at the end of a very dark tunnel.”

Shaali’s problems don’t disappear with the gift of farming supplies. She still needs to be creative to find money for fuel to power the generator she uses to irrigate her land.

She still has many family responsibilities, and grief to work through. And she has to develop an entirely new system of bringing her produce to market—all the young men that used to buy her vegetables wholesale to sell at local markets have been taken by war, just like her own loved ones.

But your support for agricultural projects like this can help alleviate the impact of the crisis.You can support families returning home and to their land. You can accelerate the recovery of an entire region.

This week for Giving Tuesday, we are digging in to give families in Syria the means to provide for themselves again. We are planting the seeds to unmake violence, to undo one of the root causes of Syria’s seven-year-plus civil war.

As Shaali’s zucchini plants start to grow, so does her hope. Hope that a war that began with drought will end with a harvest.

We need you to go with us, as we dig deeper into Syria than ever before. Sign up to be the first to hear what we have in store this Giving Tuesday. Or get a jump start and make your Giving Tuesday gift early.

As for Shaali, it’s too early to count her profits, but she is confident in her ability as a farmer, and in God. “As long as we do our part of working the land, God will do the rest.”