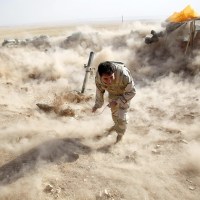 Here are a few articles we’ve referenced in our efforts to understand and explain (some of) what is going on in Iraq with regard to the international response to ISIS and what to expect in 2015.

On December 18th, peshmerga fighters rescued hundreds of besieged civilians on Sinjar mountain, the scene of a dramatic battle in August. Kurdish forces continue to advance on other ISIS-controlled cities.

The Islamic State is failing at being a state

The so-called Islamic State faces challenges to its claims of utopian governance. Ineptitude and coalition airstrikes have damaged morale and the group’s ability to govern.

The agreements’ architects believe the deal will help reunite the country and facilitate greater cooperation in the fight against ISIS.

The Fighters of Iraq who answer to Iran

This article profiles three Iranian-allied Shiite militias active in Iraq and Syria. Together, they are considered “the most powerful military force in Iraq.”

Despite the catastrophic events in Iraq, daily life continues, albeit with significant difficulty.

ISIS Hit Hard, but Iraq Offensive Could Be Year Away

American and Iraqi officials plan an offensive to retake Mosul and nearby territory, but caution it remains “months, maybe a year” away.

This article details the well-known problem of corruption within the Iraqi military. Iraqi Prime Minister Abadi has initiated reforms, but the government still faces obstacles in building an effective and inclusive fighting force.

The Islamic State Strategy for 2015: From Militant Group to Jihadist Government

ISIS is likely to focus on consolidation rather than major expansion. Experts forecast a rise in propaganda and calls for lone wolf attacks. Expect more attempts to win the loyalty of existing jihadist groups across the region as well.

Why Does the U.S. Like Iraq’s Kurds But Not Syria’s?

As the world battles ISIS and searches for a solution to the crisis in Syria, more eyes may turn to the Syrian Kurds.