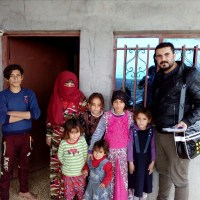 From an early age, Iraqi girls begin to help around the house. As soon as there are younger siblings, they help with babies. When they’re a little older, they help to set food and dishes out for meals, and help clear up after. By the time they are 10, they help to clean the house, and within a few more years they are learning to cook.

Girls are often called “little mothers” because of the way they help.

Heba, pictured below in the red headscarf, learned to help around the house like most Iraqi girls. When she was 14, ISIS killed Heba’s father, an Iraqi police officer. 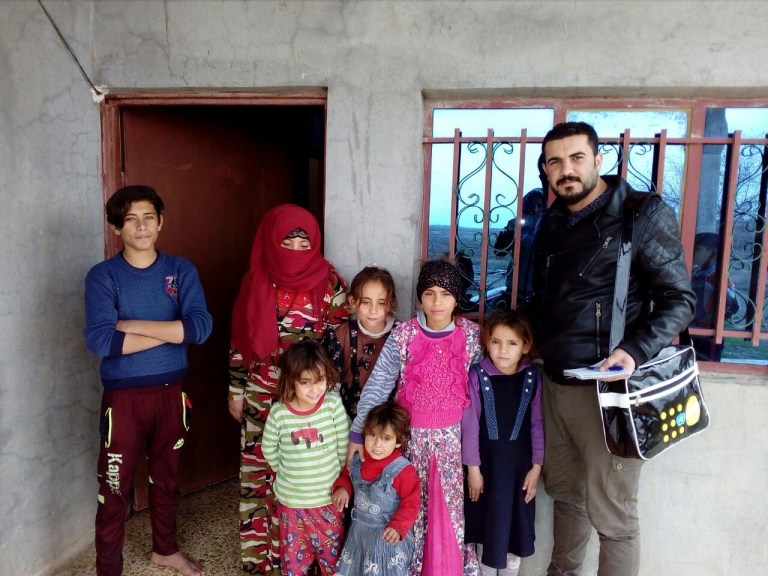 Heba took on more responsibilities at home. Two years later ISIS kidnapped her mother. No one has heard from her since.

At 16, grieving her mother’s disappearance and imagining the worst, Heba became the head of her household, completely responsible for the care of six younger siblings.

This “little mother” had to grow up fast.

For the past two years, Heba went out working each day with an uncle, fishing on the Tigris River. Most days she would catch a fish that would feed her brother and sisters at home. Sometimes she would catch more than one fish and could make a little money.

Earlier this year, you provided Heba with a new business—raising sheep. The animals provide Heba’s family with fresh milk, yogurt, and cheese. As she grows her flock with new lambs twice a year, she will have an income base that steadily increases.

Taking care of sheep allows Heba to be home more, to be there to raise her younger brothers and sisters.

Nab, pictured above with Heba and her family, is the program officer who helped Heba start her new business. He was so moved by her situation and by her strength that he sent us this this story.

What he wrote was so powerful, we wanted to share it with you in his own words.

The Children are War Victims

There are many pictures and many forms of tragedy… under the forgotten houses. Hunger, thirst, deprivation, loss, and a series of heartbreaks that erupt in the pale breasts.

Whenever night comes are those who formulate stories of that tragedy. As I walked through the villages, I saw dozens of stories which end with a silent tear.

Among those is a story of Heba’s family who are living near the left coast of [the river]. The father of this family was working as a federal policeman, and was killed by terrorists in 2014. The terrorists didn’t leave the mother of this family alone—she was kidnapped by them in 2016. No one is sure of her fate yet, though the terrorists’ injustice and their black hearts suggest that they killed her.

Those terrorists do not differentiate between the souls of men, women, or children. Everyone who seeks to build a life is their enemy.

The children are war victims, whether killed or trapped by the cost of war. Today, children are suffering from poverty and hunger. Many children are fatherless—including Heba, her brother, and sisters who lost their parents. They had to be strong and rely on themselves.

Heba is 18 years old. She had to leave childhood because she couldn’t afford to provide her and her siblings with enough food. She turned to the water, and worked in fishing to meet the minimum requirements for survival.

What a tragedy, when a girl’s life is reduced to struggling night and day for a loaf of bread to feed small stomachs.

When you see their situation, you want to find someone responsible. It is obvious that terrorism is the cause of the tragedy, but can the country be a father to them? Can the community provide bridges of tenderness and kindness to give the orphans hope?

This tragedy will not be ended by a fish caught on the shores of the Tigris. It won’t end until a whole country embraces these kids.

In the course of Nabil’s work, he has come to believe that community is what is needed to heal the impact of terrorism in Iraq. We work with local partners—we build up local organizations—precisely for this reason so Heba and her siblings get to experience two kinds of community.

Second, Heba and her siblings get to experience the extended community that is you. While she knows all too well that strangers can bring destruction–like the ISIS fighters who killed their father and kidnapped their mother—she is learning that strangers can also bring hope.

You entered into Heba’s life with sheep that allow her to take care of her family. You provided tangible love to her family, even though you’ve never met them. Heba has worth to you, simply because she exists.

What ISIS tried so hard to destroy, you built up.

Become a monthly donor—and help families like Heba’s reclaim their lives from the ashes of war.