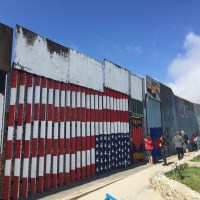 The US-Mexico border is complicated.

There are endless debates over how to protect it, who to let across it, and what to do with the current wave of asylum seekers trying to get in.

And while debates over immigration are nothing new, the current crisis is different from what we’ve seen in the past.

On a special bonus episode of the Love Anyway podcast, we take an in-depth look at the situation on the border, why asylum seekers are fleeing, and what we can do to help.

The number of asylum seekers crossing the border fluctuates each year, but in general, illegal border crossings have fallen since the year 2000. However, the number of families seeking asylum—as opposed to individuals—is at a new high.

That’s an important distinction to make.

The current US process—whether people are seeking asylum or attempting to immigrate, or even if they cross illegally—is based on the assumption that it’s mostly individual males trying to cross. The system in place is ill-equipped to accommodate families fleeing for their lives.

Most families seeking asylum at the US-Mexico border come from the Northern Triangle region of Central America. Guatemala, Honduras, and El Salvador. This is one of the most violent regions of the planet not in an active state of war. Many of these families are trying to escape gang violence. And what some of them go through just to get here? It’s unimaginable.

Women and girls often travel alone because they are told they have a better chance at surviving. Before they leave some are given contraceptive injections. They are told, “You will be raped, and don’t fight back.”

These women and girls know they will likely be raped and they willingly choose this over staying in their home countries. They are that desperate. Their current situation is that grim.

But when these girls arrive at the border, they’re often turned away.

The epicenter of the asylum crisis

Asylum seekers have no guarantee of being allowed into the US, much less being allowed to settle here. In recent months, the government has employed a metering system, requiring families to wait on the Mexico side of the border until their number is called. These are legal asylum seekers, caught between violence at home and uncertainty ahead.

Some days, only a handful of numbers are called.

And the epicenter of this crisis is El Paso, Texas.

El Paso is said to have better transition centers and better immigration lawyers. People are still going to Tijuana and other parts of the US border. But migration has significantly decreased in the outside areas, as many are being directed to El Paso.

Once a family is allowed to present themselves for asylum, they’re transferred to US Immigration and Customs Enforcement, also known as ICE. These families are kept in detention centers that were meant to accommodate adult males, waiting while officials determine whether they have a credible claim to asylum—and whether they pose a criminal threat.

Treatment in the ICE facilities has been reported as crowded, with not have enough space for people to lay down at night. There aren’t windows and the lights are kept on around the clock. It’s also kept very cold, and residents don’t have blankets or are just given a thin foil cape.

Once ICE is finished, asylum seekers are released, without context, without further guidance, with a stack of paperwork that they don’t know how to read, into a city they don’t know, without resources or belongings.

It’s at this desperate point in their journey that we are stepping in.

When an asylum-seeking family is released into the US—which means government officials believe they could be granted asylum and that they do not pose a criminal threat—they are sent to stay with a sponsor family who takes care of them while they wait for their case to be heard. Sponsors are usually extended relatives or host families who volunteer to house asylum seekers.

But there is often a 2 to 3-day gap between the time they are released and the time they reach their temporary home—which is often hundreds of miles away. And remember, they have almost nothing. They might have spent their savings just trying to get here. Their possessions may have been stolen along the way or confiscated while in detention.

This is the gap where we are choosing to stand.

We hope to provide up to 10,000 emergency backpacks filled with critical supplies for those who left everything they have in search of safety. Each backpack is filled with reusable water bottles, non-perishable food, socks, underwear, toothbrushes, toothpaste, deodorant, baby wipes,  children’s toys, and more.

Each pack is a lifeline, to help someone get through their first and most harrowing days in a new and unfamiliar place. Many of us know how overwhelming it can be to set foot in another country for the first time. Imagine doing so with almost nothing.

So what can we do? What we’ve always done. Show up for those fleeing for their lives.  We’re stepping into the gap, joining with local friends here in El Paso to provide emergency backpacks for 10,000 asylum seekers.

We’re asking you to help in one of two ways:

The border is complicated. And the question is whether our love is bigger than what is tearing us apart.

Whether it’s possible to care about border security and the well-being of asylum seekers.

We’re standing in the gap for asylum seekers. Join us.