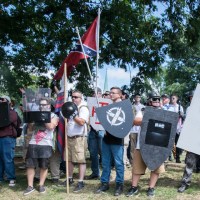 What does it look like to love anyway when people are marching through Charlottesville with Nazi flags? And should we even love anyway? This idea is more comfortably applied at a distance and much easier to apply to other people.

But it applies all the time. To everyone. That’s the radical thing about it.

However, it does not mean we have to be “cool” with everyone. So let’s break down what love anyway does and does not look like in a situation where Klansmen wield torches and a white supremacist mows down a thirtysomething woman with his car in an act of terror.

“Love anyway” does not mean we tolerate white supremacy or make any room for it in our society.

It does not mean that the oppressor and the oppressed should be treated as two sides of the same coin. The vulnerable, the oppressed, and the hurting should always be prioritized, even while we love those whose hearts have been corrupted by racism, recognizing that their well-being is tied up in the renunciation of hate and oppression.

It does not mean we sacrifice the well-being of people of color—especially children of color who are watching our response to these events—in order to make “peace.”

It does not mean we should all just “try to get along” or appease racist groups in order to avoid conflict.

It does not mean that we ignore these groups or allow them to exist unchallenged. We cannot accept ideologies that seek the destruction of others.

It does not mean that those who perpetrate evil in the name of white supremacy should avoid dire legal consequences for their actions.

It does not mean that we seek the destruction of the people in these groups, even as we work to dismantle the ideology.

It does mean we recognize that racism is woven into the very fabric of our society, and we work hard to call it out and challenge it.

It means we stand by our black and brown brothers and sisters and make sure that they know their well-being is more important to us than the feelings of their oppressors.

It means we show up to love our brothers and sisters of color by pointing out the ways racism infiltrates our everyday language, culture, media, and government—rather than pretending that the extremists who showed up in Charlottesville are the only perpetrators.

It means that we advocate for the rights and fair treatment of people of color by law enforcement.

It means we challenge white privilege when we see it in the relatively gentle response of law enforcement and government officials to white supremacist marching in Charlottesville, compared to their response to protests largely made up of people of color.

It means we seek justice and reconciliation, instead of victory and domination.

It means we use every nonviolent tactic we can think of to destroy hate and unmake violence, but we distinguish between destroying ideologies and destroying the people who hold them.

It means we respect the humanity of the people in these groups by refusing to injure or kill or dehumanize them, even though they don’t show the same respect to others.

It means we advocate for the healing and rehabilitation of white supremacists whenever possible. Because real peace is healing for everyone involved.

It means we refuse to lose sight of the humanity of the oppressor… while remembering that our hearts belong to the oppressed.

We love anyway. But our hearts will always belong to the oppressed.