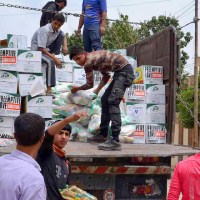 That’s why you’re sending truck after truck of food, water, and basic supplies into west Mosul. Into the neighborhoods with the greatest need.

Families who have been caught in the crossfire of coalition forces and ISIS are starving and desperate. Between three years of ISIS rule, the battle to liberate Mosul, blown up medical facilities, a lack of food, and no clean water, they’ve been through hell and they’re barely hanging on.

Last week, you sent 5,000 food packs to desperate families on the frontlines who had just been liberated from ISIS the day before. People who were scrounging through garbage and eating grass to survive now have full pantries and food to feed their families for up to a month.

In the last three days alone, you trucked in over 350,000 liters of clean water for more than 7,000 people. Because of you, thousands of children will avoid life-threatening, waterborne illnesses caused by dirty drinking water.

In the days ahead, you’re sending another 5,000 food packs to starving, bombed-out families in west Mosul, along with 5,200 hygiene packs filled with basic necessities like Sisterhood Soap, toothpaste, and feminine products. These things keep families healthy, prevent medical problems, and make life a little more bearable, even in a war zone. They help prevent an already difficult situation from being made worse by families having to flee their homes. They help people hang on until the worst is over and they can start rebuilding.

Most of these hygiene packs will be distributed directly to families, along with their food. But we’re also delivering a number of kits to the medical clinics we support in west Mosul, where they’ll be given to women who come in seeking psychological care for gender-based violence they’ve suffered. The kits also include information about our empowerment programs, in case the women need a fresh start.

The timing for this delivery is especially important because Ramadan, the Muslim holy month, begins soon. Having food and hygiene kits will help families do something more than just barely survive. It will allow them to worship and celebrate together.

And that’s important. Because these are people. People who just want to get back to life.

Thank you for continuing to show up in the midst of immense need, and for never losing sight of their humanity.

Because love doesn’t just show up once. Love keeps showing up.

Keep showing up for families in west Mosul.