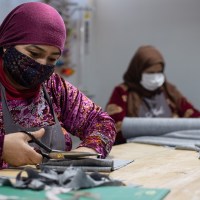 This article first appeared in the Preemptive Love Journal, Vol. 7.

It’s early morning and still quiet in the refugee camp, roads empty except for men leaving to find daily construction work in the city. It’s too early for the vegetable vendors to drive through the streets in their small trucks, blasting their wares over loudspeakers. Too early for children to play with the neighbor kids from across the street in the dirt road between. But it’s not too early for every wife in the camp to be up and busy with her morning chores.

Fatima and Noora feel an urgency to get through their chores. They make quick work of breakfast for their families and dishes, cleaning their tiny homes, and washing floors. They change into nicer day-dresses and headscarves, grab their purses, head out the door and soon meet up on their way to our hub for artists and makers.

For a lot of women in Syria and Iraq, once you get married, your social circle begins and ends with your family. But there is something special about friendships between women. There is a listening ear, support, and encouragement, no matter what is happening at home.

Noora and Fatima didn’t really know each other well before working at nearby sewing machines at the sewing studio at our hub for makers. As they worked with sewing machines, sergers, and shears, they quickly found they have a lot in common. They are both Syrians, made refugees by war. They were both seamstresses in Syria, experts in their craft. They are both second wives to their husbands, fitting into a complex family structure. And with their sewing businesses, bolstered by the support they get at our sewing studio, are the sole breadwinners for their extended families.

Sometimes the sewing studio is filled with the staccato sound of their machines making chains of stitches on a tall stack of cut fabric. Sometimes it’s filled with the buzz of conversations while they clip off tails of thread. There is laughter. There is companionship. And there is a deep sense that they aren’t alone in this camp for refugees. They now have a friend who understands.

It took the contributions of a wide community of people on the other side of the world to make this hub for artists and makers possible. It took women who sew or crochet, make jewelry or furniture, who understand what it feels like to support your family with your skill and creativity. But they helped to build something so much greater—a safe space where artisan skills, business skills, and friendship can all grow.

For Noora and Fatima, that’s priceless.