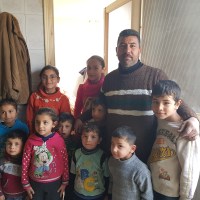 They were safe—and that’s no small miracle. After years of war in a Syrian community that suffered so much damage from bombs and bullets, they were grateful for their lives. Grateful for the chance to return home and start life again.

Mohammad fled home with his family—including eight children. If you think getting a carful of kids out the door and to school on time is a feat, imagine fleeing home on short notice, with eight children, not knowing if you’ll ever be able to return.

Standing with Mohammad and his family in their kitchen, bombs and bullets no longer ripping through their hometown, the emotion in the air was palpable—they were grateful.

Mohammad and his family returned to a shell of an apartment. Like so many other homes affected by war, the windows, doors, electrical wiring, and faucets were all missing. The electricity and water they could do without for a while. But doors and windows that close and lock—that is an essential need.

An organization came a while back and offered to repair their missing doors and windows. They brought clear plastic sheeting stenciled with the organization’s name, fastened it to the yawning openings and declared the project complete.

Mohammad and his family were grateful.

The plastic sheeting couldn’t keep the family safe though. And it didn’t keep the smell out. The strong smell of burnt cars—a combination of the sulfur-black powder smell of spent fireworks and the hot metal of a car overheating—was strong in their home even though they live five stories up.

When it became safe enough to clear the streets of burned-out vehicles, the local government created a scrap yard in the field between Mohammad’s apartment block and the neighborhood school. Cars, buses, trucks, and ambulances tumble over themselves, their burned out metal skeletons piled into long rows. It is the new view from Mohammad’s apartment. And the smell never let them forget for a moment what their city has been through.

Mohammad and his family needed more than plastic sheeting on their windows and doors. They needed protection and security. They also needed to be able to wash their babies, and have light to cook dinner.

That’s exactly what you provided: doors and windows that close and lock—and that keep out the burnt smell from the scrap heaps; electrical wires and outlets that allow them to function after dark; and kitchen and bathroom faucets, so each of their children can clean up after a hard day of play.

“You made a home for my family and I, and a house that we can call home again,” Mohammad told us. In some ways, his words were unnecessary.  We could feel the happiness in his home! Mohammad’s house is full of children running around, and playing joyfully. The atmosphere makes you forget that any of the war ever happened.

Mohammad and his wife are grateful. Their children are happy to be home. And thanks to donations that provided basic repairs like proper doors and windows with locks, they feel safe in their home again!

They are putting the past behind them and making plans for the future, and Mohammad is looking forward to raising his children for a better future.