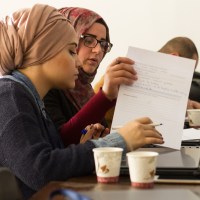 “We’ve had people coming into the program, especially women, come in and say ‘I do this for my daughter. I do this for my son, so I can teach them something that I know they would not get from school.’ And that’s encouraging because she’s not the only generation we’re lifting up. She’s translating that to other generations too.” -Nareen Farhad

Countries like Iraq still face challenges when it comes to offering full access to education and the workforce for young women. We’re finding one of the keys to shifting that culture is intentionally creating safe spaces for men and women. We sat down with Nareen Farhad, WorkWell Iraq Country Program Manager, to hear how her team is creating change for this generation and the next.

Erin Wilson: “So we get a question quite often, about how we get so many young women participating in our tech training and jobs program. And it’s a really good question.

And you are the perfect person to ask since you’ve been on staff through the whole process. You started as an instructor. And then you earned the position of training coordinator for one of our tech hubs. Then manager. And now you’re in charge of programming for all of our Iraq tech hubs.

So tell me: how have we been able to make a safe space for young women? And how have we earned the trust of their families?”

It’s not a place where it’s all managed by men. We have a lot of women teaching and managing the tech hubs. They sit down with these individuals and listen to them. So that feeling of safety comes from a lot of components that overlap each other. But I would say overall, it started with men themselves bringing people from their families to the classes.

In the beginning, we had a lot of people coming from different places, but mostly they were coming from the refugee and displacement camps. For them, it was like an escape, like going from an adverse atmosphere to something else. Because we have piloted classrooms in the camps, and have had small sessions in the camps. But not very many people showed up to those because they find comfort in being somewhere different.

So first, men brought their family members. And then women started coming in and realizing that this is actually a very safe space. And just to underline that, we have had a lot of cases where women used to start the course, and their father or husband would come with them. For one day or two days, they would sit in the lobby, and wait until their family member finished for the day. But then the husbands and fathers would disappear—they wouldn’t come back because they see it’s a safe space.

Those who come are respected, they are being seen as individuals. A coach goes to you and says, “Can I have 30 minutes of your time today? I want to get to know you more.” And I think the authenticity of that relationship gives them the feeling that they’re safe.

And it’s not only about men bringing them here. I think it’s also women themselves feeling safe when coming in. Because quite frankly, you could feel unsafe if you go somewhere where you’re not viewed in the way they are here.”

Erin: “Nareen, can you talk a little bit about that—the cultural challenges that women in Iraq find getting further education or entering the workforce?”

Nareen: “Overall here, if you look at the past–education or the workforce–they were not as accessible for women as for men. There has not been equality here in terms of jobs and education opportunities. From a cultural perspective, it’s never been easy to be prioritized over a man who is applying for a job.

Erin: “So by training, and equipping, and coaching young women, you’re actually having a role in changing culture.”

Erin: “Is it extra challenging for families that live in the refugee camps to let their daughters leave the camp, leave the safety of their family home to go somewhere in the city?”

Nareen: “I would say so, and I understand. Because for them, they might have gone through very difficult roads in order to get [to the camps]. And now, that’s their safe spot. And leaving that to go somewhere else—of course, it will be challenging.

And that’s why we have put extra dedication towards details for those who live in the camps. For example, when it comes to transportation, providing them with the same bus, and the same bus driver every day so their families don’t question why their daughters or sons are being picked up from the camp by different cars. Intentionally, you have to make it safe and make it feel safe for them so that they can actually let go.

And as I said, for some of them, it’s still difficult. They still choose to come with their daughters to the facility in the beginning so they can see if it’s a safe spot. But it’s understandable from our side.”

Nareen: “I would say I’ve always felt proud of them. But if I think about it on another level, I feel like we’re giving another generation the chance to have a different outlook on life. They’re walking out from the program with a certificate that they’re so happy with, but I know for sure this experience isn’t about that certificate they got.

When they’re in the learning process, they don’t notice. But after six months, or 10 months time, when you speak with them again, they’re at a totally different stage of life. They’re totally at a different point. Then you realize—it wasn’t just the certificate. It’s what they learned, and how they felt.

When it comes to the people we serve, for us, it’s never about the tech training that we give them. It’s about the life they get after they graduate from the program. And it’s not even about finding a job. It’s about becoming a different version of themselves that they couldn’t even imagine.

Because when they come in, we do a lot of talking with them. We have a lot of conversations. And when we do that, the way they view themselves changes—they realize they can actually be and achieve much more than they thought.”