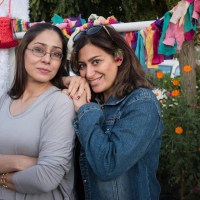 In the northern Iraqi city of Halabja, “women’s work” has recently taken on a different dimension. Every Wednesday the city holds a special “women’s market” where local women can sell goods and foods they produce themselves.

The market started in a city park on March 8th and was so popular that it became a weekly event, says Sundus Hassan, who helps organize the events.

Around 20 women currently sell their products at the weekly market and Hassan says many more have applied to join. “We will support any woman from in Halabja who has a skill and who wants to participate,” she explains.

On sale are things like hand-knitted items, cosmetics, herbs, bread, and a special Kurdish dish made of dough, onions, and spices.

The women have also been known to produce new things out of recycled materials. “In this way, we are protecting the environment,” Hassan explains. “And more importantly, recycled goods are becoming a source of income for the women.”

“The effort made by these women is so wonderful,” says Hawraman Mohammed, one of the customers browsing in the market. “It’s unique and it makes me happy.”

Mohammed says he just came to take a look and to drink some tea but that he will return next week and probably make some purchases.

“It’s so different here and it feels relaxed,” added Roseanne Nasser, another market shopper who says she was here with friends and purchased some tools. “We’ve decided to come again next week too,” she noted.

“Most of the girls participating here are graduates or students who have yet to find a job,” says Nakhsheen Namaq, who sells homemade bread at the market. “It is a great opportunity for all of us to meet and be productive. I graduated six years ago but I haven’t been able to find a good job,” she notes, “That’s why I’m here selling bread.”

Part of the reason that the collective was able to establish the market in the city is because two of its committee members are senior politicians in the Halabja – including the city’s female mayor, Nuxsha Naseh.

The other committee member is Kwesten Akram, the head of the municipality. Akram says that when the collective asked if they could use the public park she said yes immediately.

“In addition to the park, there is also an empty lot next to the Halabja municipality buildings that we would also like to give to the collective, so they can establish a permanent space there,” Akram added.

Prices at the market have been set lower on purpose, organizer Hassan says. “In the past market sellers would buy our products at a lower price and then mark the up and sell them,” Hassan explains. “Now we are selling everything ourselves with no middlemen. Our profits have increased.”