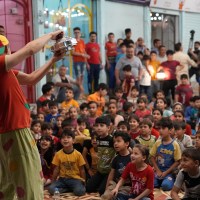 This month our community of peacemakers will help to open dozens of new businesses in Mosul, Iraq. Mending a city destroyed by war takes time. A mere six weeks after Mosul was declared liberated from ISIS, we partnered with families to re-open businesses. Since then, we haven’t stopped. A version of this article first appeared in Journal Vol. 7.

Old City Mosul, an ancient warren of alleys and multi-leveled structures built over fifty centuries, is a three-dimensional, interlocking puzzle. Before ISIS took control of the city in 2014, churches and mosques stood side-by-side, and older residents still remember Jewish neighbors who lived here into the 1940s. Physically, historically, and culturally, the Old City has always been layered and complex.

By October 2016, this area was complex for different reasons. After more than two years of ISIS rule, anyone who wasn’t the “right kind” of Muslim was driven from the city or killed. ISIS fighters and supporters moved into any homes they wanted, claiming as their own the collective belongings of whole generations of strangers. Anti-ISIS residents couldn’t voice their feelings or risk losing their lives.

That October, into a well-crafted climate of fear, Iraqi and coalition forces began a fierce campaign to liberate Mosul from ISIS rule. There was little appetite by those trying to bring down ISIS to be too careful about the Old City or its residents. They wanted an end to the reign of terror.

The Old City was treated like a wasp nest—as if every living being inside was a threat. Rockets and airstrikes were let loose on these neighborhoods to get rid of the “vermin.” No army wanted to risk their soldiers in house-to-house combat, so they attacked from the air, with little regard for the families still there, having managed to survive ISIS’s reign.

Over nine months of battle, neighborhoods were freed a few streets at a time). Residents fled behind the front lines, traumatized, starved, and exhausted. The cost of liberation was far more than the price of the bombs dropped–the real price of liberation was lives lost, and the damaged homes, livelihoods, and emotional health of everyone who survived.

Early on, as neighborhoods were liberated, the community needed partners to cover wide-scale emergency care: food, restoring water piping to medical clinics, and medical care. After those first urgent needs were largely met, residents began working collectively to bring Old Mosul back to life for families. The only way forward for this ancient community is layers of restoration over time: supporting families and homes, businesses, and community spaces.

Grief is exhausting. So is stepping into the gaps that death leaves behind. Nadira first lost her husband. Next, she lost her son in the battle to free Mosul. By the time liberation came, Nadira found herself taking care of four grandsons, with no means. Her heart was entirely open, but she had no source of income, no formal education, and to be honest she was tired. How could she possibly provide enough to take care of these boys in the range of ways they needed?

When our community invests in new businesses, it can seem like simply helping provide the means for families to support themselves financially. It’s rarely that simple. Investing in Nadira’s business, a few doors down from her home fills a number of gaps left when her son was killed.

Nadira doesn’t run her business alone—she couldn’t. An uncle of the boys helps advise on which products she should carry in her electrical supply shop—a good business since it’s the only one in her neighborhood—and how she should price goods. Her oldest grandsons staff the store and take care of sales. They’re picking up skills they would have learned from their father, learning what it takes to run a business behind the scenes, so they have the knowledge they need to open businesses for themselves one day. Three generations are working together to make sure they have what they need to live, as they make sure their neighbors have access to goods they need to rebuild their lives as well.

With this single small business, Nadira is keeping her family together, giving hope to these boys when hope isn’t always easy to find, and providing a service for her community with a much-needed shop.

It’s a little magical watching Faris work with sheet metal. With a couple of machines, a few hand tools, a bit of time, and a lot of skill, Faris turns flat sheets of aluminum into well-built ductwork for restaurant kitchens. Faris is exacting with his measurements and careful in cutting and bending forms into shape. He’s a quiet, unassuming man, who is proud of his work. It’s a profession that always allowed him to take care of his family. But when ISIS took over his city, there wasn’t much call for this kind of work. The public and social side of Mosul was shut down during those years; families needed to eat at home, rather than out at restaurants. Business got very quiet for Faris.

Most businesses can withstand dry spells. The ISIS years were more than a dry spell—they were a disaster for so many business owners who weren’t loyal to ISIS. Disaster has a way of digging a hole it can be impossible to climb out of. Liberated Mosul should have been a perfect place for Faris to rebuild, as restaurants and cafes slowly reopened. But Faris no longer had his equipment, tools, or a shop. When your trade is metal, you need more than know-how to work.

It’s excruciating to have knowledge and skills, but no means to use them. Faris sold off his family’s belongings to meet their daily expenses. When there was nothing left to sell, he started borrowing. He had no idea where his family’s next meal would come from.

Bridging gaps—that’s what community does. Tools and some simple equipment was the only thing keeping Faris out of the workforce and unable to provide for his family. This community filled that gap and enabled Faris to rent shop space in the aluminum section of the bazaar, where the other tradesmen work.

Reequipping Faris was a simple thing to do. It took a handful of hours in the bazaar to buy everything he needed. But in a lot of ways, it accomplished the impossible. On his own, Faris had no way forward. Together, there was a way.

Within two months, Faris’s life was completely different. He earns enough every week to take care of his family’s daily needs. He knows where their next meal is coming from—the earnings in his pocket. He feels independent now, and confident in his family’s future security.

He’s also contributing to his community’s stability. By renting a shop in the aluminum section of the bazaar, he’s part of the recovering face of the city. His neighbors see choice instead of the scarcity they knew under ISIS. They know they can find what they need to restore their own businesses and homes. Faris’ success dismantles the fear and hopelessness instilled by ISIS, adding something vital to his neighborhood.

Fear. Mistrust. Division. These were ISIS’s most effective tactics in bringing destruction; far more effective than bombs. ISIS created an environment where generations-long neighbors turned on each other, and not even family members felt safe. For the most part, families stayed inside their homes, hidden from view. It will take a generation at least to heal the heart of this community from the poison spread over a few years. And it will need an investment of fresh energy.

Every time Mubasher picks up a paintbrush, he is actively countering the effects of ISIS, which tore down all public art and forbade teaching art and music in schools. In their eyes, to be an artist was to be blasphemous, and commit crimes worthy of death. But for Mubasher, creating pieces that echo the ancient art of Mosul and its heritage is not only his work but also a passion that comes from his soul.

Mubasher chooses to actively model a life of art. For his studio, he chose a glass-fronted shop, so anyone passing by can see him putting paintbrush to canvas. His studio fronts a public square across the street from Al Nouri mosque—an ancient place of worship where ISIS first announced their “caliphate” to the world. And the public square that acts as a threshold to Mubasher’s studio? It’s part of a larger community project aimed to bring healing to the Old City. While Mubasher makes his art, more often than not he has a huge audience—children and families who come to the square for fun events like shows with clowns and magicians, who also get to see making art normalized.

Mubasher has big plans for his life and big dreams for his city. But no one can do this work alone.

Mubasher has joined forces with others who also want to see color and beauty restored in their community. They work with craftsmen and shopkeepers like Faris and Nadira, who use their skills to rebuild businesses and neighborhoods. Every small business owner in Mosul is investing everything they have into their city—their time and talent, their energy and expertise, their courage and hope for a future here.

ISIS flattened a multi-level community culturally and emotionally. The bombs that fell during the battle for liberation flattened it physically. Coming alongside Mosul residents as partners not only makes businesses possible but also restores dimension. Families are able to stay together, opportunities are created for trust to be rebuilt, and loose threads broken in war are woven back into the community.