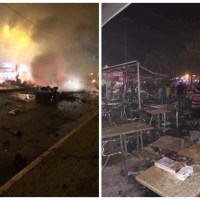 They planned out every detail in advance.

Selected each component as they shopped and as they fashioned their bombs. Last night, they packed a car with those explosives and drove through the city streets, through the Baghdad neighborhood of Karrada—and chose a spot full of families.

Chose a spot full of families enjoying ice cream after a long, hot day of fasting for Ramadan. Parked the car. Set off the explosives.

They killed at least thirteen people, wounded dozens, and traumatized thousands more in a blinding flash of light against a calm, black night sky.

And cries to God. Cries for mercy.

Early this morning, during Baghdad’s rush hour, a second car bomb exploded. The market near the city’s pension office was filled with elderly residents, retired pensioners, and fishmongers when the explosion happened.

Another seven lives were taken. Another thirty souls injured and thousands more left to cry out for mercy, while a massive plume of black smoke rose into the cloudless blue sky.

ISIS hasn’t yet officially claimed last night’s bombing as their own work, but fingers are pointed in their direction for the attack—a sure strike against Shia Muslims. This doesn’t tell the whole story, though.

Whoever targeted families enjoying a little rest after a day of fasting, whoever targeted elderly residents after a life of hard work—they intended to send a clear message: you will have no rest.

The first ten days of Ramadan are set apart as the Days of Mercy.

In Baghdad, five times today observant Muslims will pray ”Lord, forgive and be merciful, and you are the best of those who are merciful.” (Surah Al Muminun:118)

In New York, after hearing angry shouts of “Go home!” for wearing a headscarf on city streets, Muslim women and girls will stop when the call to prayer comes and ask God for mercy.

In London, after reading hate spewed at them in social media comments and online forums, young Muslim men will stop when the call to prayer comes and ask God for mercy.

Where is God’s mercy this morning?

We are God’s mercy in the world.

Where mercy is absent, we are absent.

May we not be found absent in Baghdad or Portland, on the streets or online. May we stand with each other. May those who seek to hurt our Muslim brothers and sisters—to give them no rest—see that they are not alone.

May we decide ahead of time that we will love even when the cost is high.