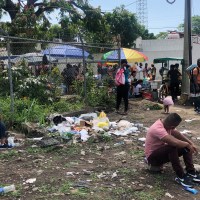 Mexico: The Border Crisis Is Surging, But Not Where You Think

Violence and desperation at home is forcing thousands of refugees to flee to Mexico’s southern border.

So many refugees are fleeing the Mexico border right now, the government is unable to cope. That’s their take on the crisis. And that was even before the number of people seeking asylum skyrocketed by 77%.

But this particular crisis isn’t about Mexico’s northern border with the US. This is what’s happening on its border to the south with Guatemala. The southernmost Mexican state of Chiapas has become the most dangerous part of the asylum seeker’s journey.

So far this year, the Mexican government has received 23,000 applications for those seeking refuge through the gateway to North America.

They are Hondurans and Guatamalans, Camaroonians and Congolese, Morrocans and Indians, a growing number of Haitians and others. They are desperate to find a place to land—somewhere safe to live, somewhere they can earn a living for their families.

Many of us have heard stories about the desperate conditions at Mexico’s northern border with the United States, but rarely give a thought to the other international border—which sees the most migrant traffic.

What do asylum seekers find?

The first thing they find is an increasingly militarized border. Honduras, Guatemala, and Mexico have long struggled to tackle national and trans-national violence connected to gangs and drug trafficking. Mexico alone has more than 350,000+ internally displaced residents because of violence.

All three countries already have a vested interest in managing who and what passes through their borders. But there is extra pressure coming from the United States government, to stop migrants and refugees before they get anywhere near the US/Mexico border. As a result, many choose to take their chances at dangerous “irregular crossings” rather than face armed officials.

For those who make it as far as Mexico, what is waiting for them in communities on the other side, utterly overwhelmed with need?

Shelters are over-full, many housing hundreds over capacity. Thousands are living on the streets, without proper resources to cook or take care of hygiene needs. There is inevitable friction with local residents. Unofficial market stalls pop up in unexpected places as migrants try to earn enough to feed themselves and their families. And those with no means at all beg on the streets.

Migrants and refugees arriving in Mexico face a 3 to 6-month wait, just to get the registration papers they need to travel through the rest of the country.

Imagine that. A waiting list to carry your babies through the desert or perhaps try your luck on the “death train,” so named because of how many asylum seekers have been killed riding it.

Most families do not have the resources needed to navigate a complicated legal process that offers no guarantee of success. By the time they get to Mexico, they are already exhausted and malnourished—both from the journey and the violent situations they left behind.

Why are they coming? Still?

Two large factors are at play when it comes to the surge of migrants and refugees: (1) home is so violent, it’s impossible to stay, and (2) constantly shifting immigration policies in the US create a false hope that anyone could have a shot at reaching their dreams.

In so many communities across Central America, violence can strike at any time. Countless refugees tell us they left home with just a few hours’ notice after getting credible threats on their lives or the lives of their children.

It’s also hard for families to get accurate information about what’s happening at the various borders they must cross. Constantly shifting news headlines compete with the stories of friends and family who made the journey earlier, as well as human traffickers who are always looking for new customers and not overly concerned with the truth.

What might have been an open door one day might be slammed shut the next. But that news never travels as fast as it needs to. As a result, thousands who flee for safety struggle to find it.

Our teams are on the ground, listening to moms and dads who want nothing more than to fill the empty bellies of their babies, meeting with shelters, and finding out what gaps we are uniquely positioned to fill.

You can join us—as a member of our community of peacemakers—when you give monthly. Your first gift will help provide survival kits for kids under 5 at the southern Mexico border. With each gift after that, you’ll keep showing up for families on the run—with food when they need it, jobs right where they are when they need them.

Most of all, you’ll belong to a grassroots community working to stop the spread of violence wherever we find it. Join us.