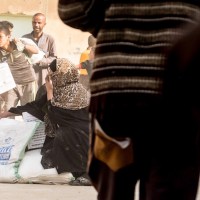 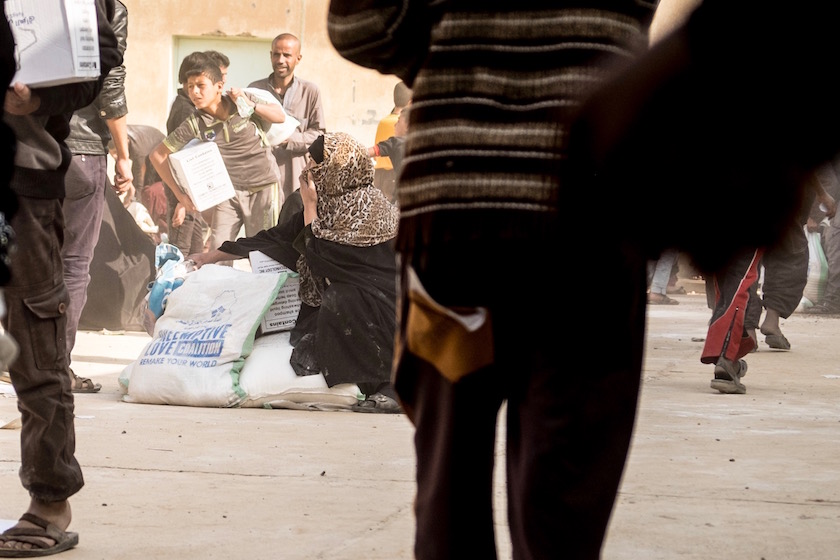 After weeks of delivering aid to families in a war zone, it’s weird how “normal” war becomes.

We’ve  been working in Hammam al-Alil, 7.5 miles from the Mosul city limits. This is where authorities just uncovered a mass grave containing the bodies of more than 100 people murdered by ISIS.

Hammam al-Alil was liberated just days before we arrived.

We came here with food, hygiene kits, and other aid for desperate families—nearly 7,000 people in total. Up to this point, no one else had come. The families here had received nothing, apart from a few small rations handed out by Iraqi police. 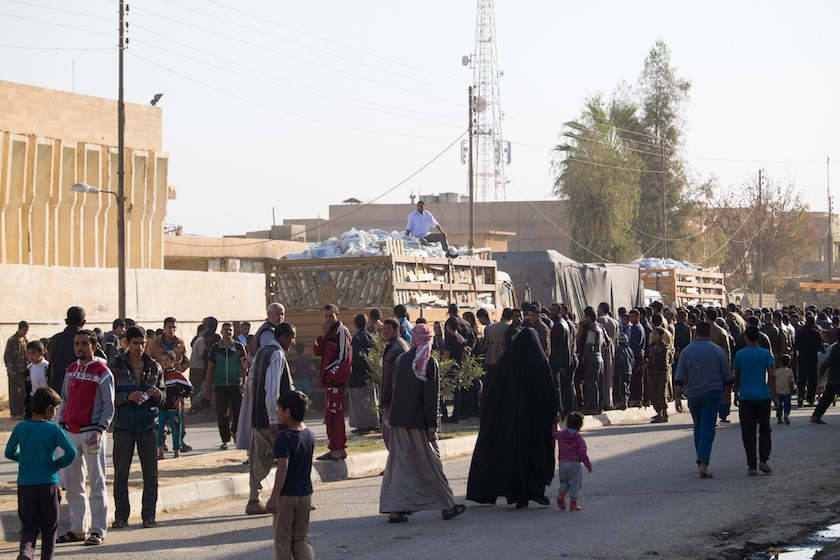 They were hungry, desperate, and angry.

And I couldn’t blame them. I would have been the same, if our roles had been reversed.

As we distributed food, the Iraqi security forces struggled to maintain order. Their plan was for everyone to wait the bottom of a hill, then send families up a few at a time, to a nearby school building, where we would give them their food packages.

But when you haven’t eaten in days—when you have literally nothing to give your children—minutes feel like months.

Men gathered in one area, representing their families, while women gathered among the ruins of a bombed-out ISIS house. Kids ran around, despite constant warnings the area hadn’t been cleared of unexploded bombs yet. 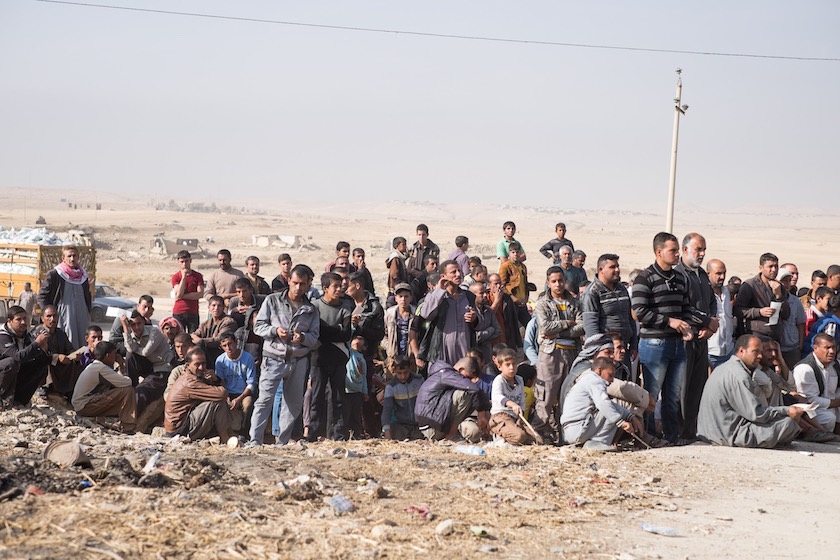 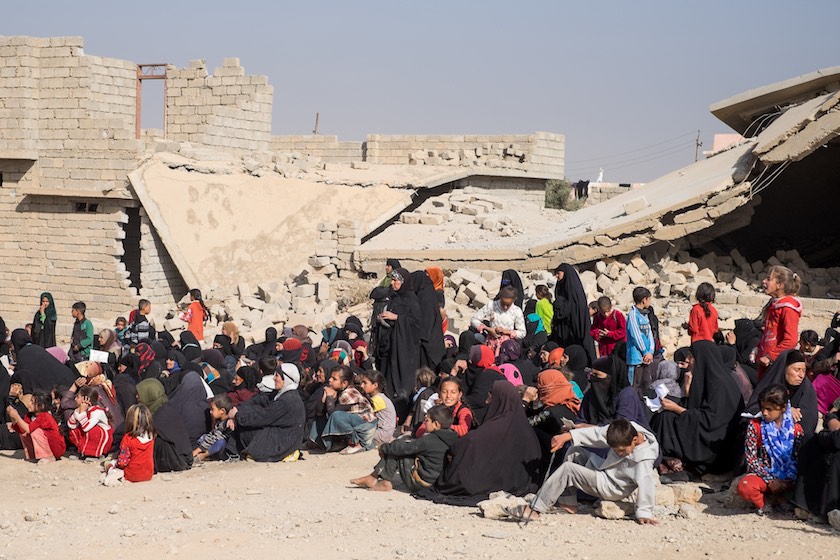 If you’re a woman in a setting like this, you’re probably there because there are no men left in your family. They’ve all been captured or killed. And in a male-dominated environment like this, without a man to protect you from the military and the masses, you are extremely vulnerable.

But that does not mean these women are meek or powerless. Anything but.

For hours, I watched women and men alike fearlessly contend with armed soldiers, begging that the process be fast-tracked. Tired and overworked—and with security as their main concern—the soldiers relied on threat and force to maintain order.

Shots were fired in the air and over the heads of the women. Guns were aimed directly at unarmed men. Mothers and fathers screamed in desperation, “Just shoot me. Otherwise I’m getting food.”

The soldiers—and some of our local staff—genuinely feared that ISIS still had operatives among these women, that one might be hiding a bomb under her loose-fitting abbaya. 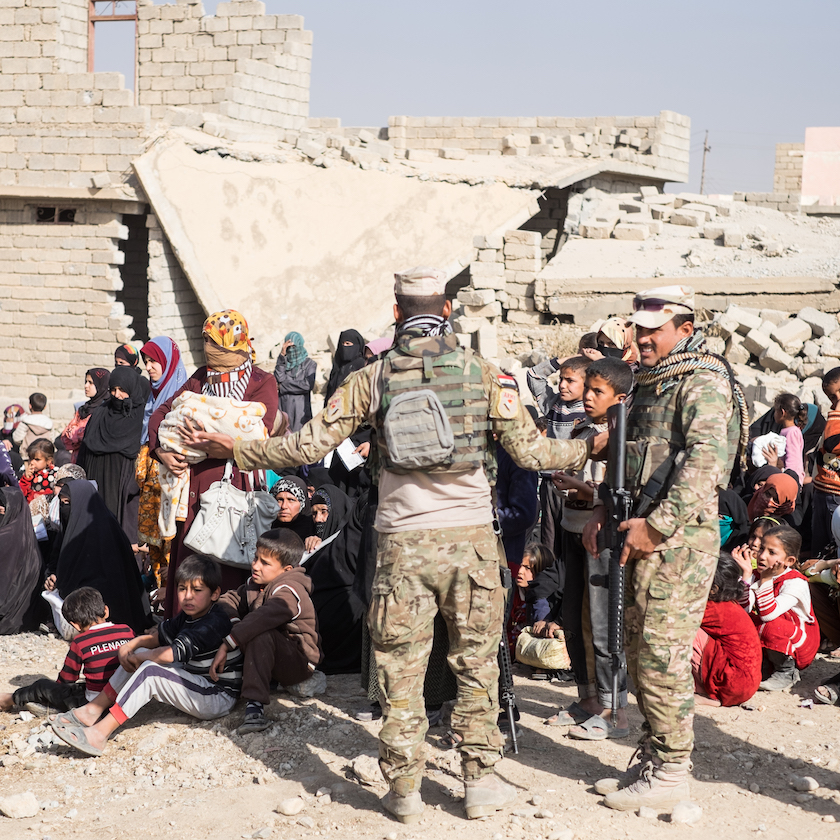 I approached the ranking officer and told him that we were packing up all our food and leaving if his men fired any more shots. He could deal with the mutiny himself, I said.

The officer smiled at me and said, “OK, dear.” Then he yelled at his men, “Mamnua’a! Shooting at the people is forbidden!”

“From now on, we will use our words,” he said, smiling like the Chesire Cat.

For the next hour, not a single a shot was fired, but soldiers still aimed their guns at civilians, purposefully to intimidate. “Using our words” often meant yelling hateful rhetoric to keep people in line. 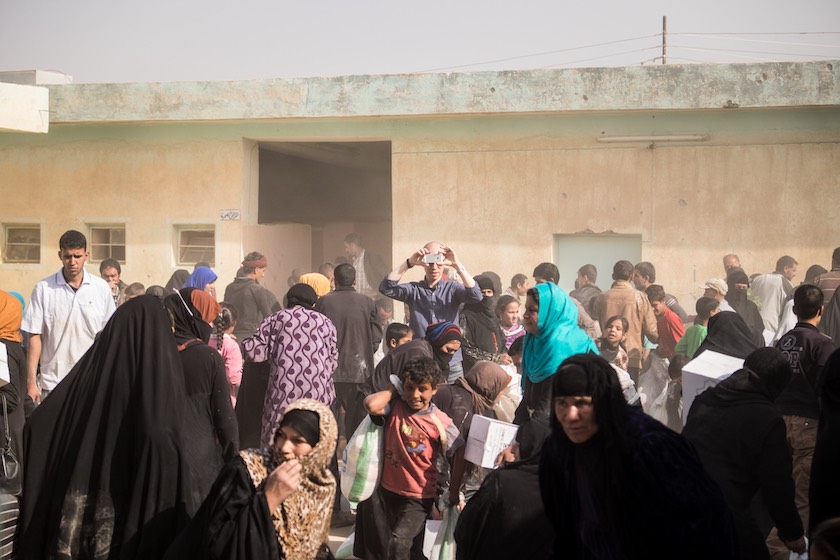 Eventually, the people moved en masse toward the school where our aid was waiting. They were not violent or out of control, but they were moving on purpose. They were going to get their food and they were not going to be treated like animals any longer.

At one point, I got caught in a choke point with a soldier I’d been watching all day. We were surrounded by  about 50 women. I saw him sling his AK-47 upward. I heard the cocking sound of his gun, and I reacted instinctively.

I put my hand on his gun and pulled the barrel down.

Don’t do this. Please.

Then all hell broke loose. Immediately after this, people began pouring into the school building through a gaping hole in the wall, made by a bomb during the fighting.

Order gave way to chaos. Some men hauled off with two bags of food, while old women, handicapped men, and those who are just too polite got nothing. It would have taken a massacre to stop it. Mercifully, these soldiers were not malicious. They were just trying to do their job. In the melee, I could feel some of them silently jeering at me…

See? We told you. This is what you get when you tell us to put our guns away.

As the dust settled, I noticed the ISIS graffiti on the blackboard, the caliphate’s flag drawn in fading chalk, right next to a child’s long-forgotten spelling lesson: “mama… baba.”

That’s the sort of contradiction we see everywhere around Mosul.

Liberation and desperation etched onto the same faces.

Hope and anger side by side.

ISIS hatred defiling a school where children are meant to be nurtured and protected.

It’s strange how the sight of ISIS graffiti doesn’t affect me the way it used to. The ISIS flag doesn’t scare me like it once did. The desperate faces of those who haven’t eaten for days, the site of dead bodies on the ground… it doesn’t stop me in my tracks.

That’s not a boast. I’m not proud of it. The dehumanizing of others should never, ever be normalized. We should never “get used” to this or “give it a chance”.

Driving into a town completely destroyed by war, seeing desperate families herded like cattle… none of this is normal.

During our time in Hammam al-Alil, I enjoyed the most beautiful conversation with the longtime headmaster whose school served as the staging point for our delivery. He told me about life under ISIS—how they “did things that are like a horror film, things you will never imagine, things you can never unsee.” How his son, an Iraqi soldier, was kidnapped, imprisoned, and tortured by militants. How his son-in-law, an Iraqi policeman, was also kidnapped and is still missing.

But for all he has seen and suffered, his piercing blue eyes still nurtured so much pride and hope. He pointed to the schoolyard where volunteers were distributing our food to the villagers and said, “That little boy… he’s one of my students!”

“Oh! And that big boy—the twentysomething carrying the huge bag of flour—he’s one of my kids, too!”

After the food was gone, the security situation deteriorated even further, and our team urged us out of town rather quickly. Running down the hill to our cars, we passed a disabled man who was visibly in pain.

“I couldn’t make it up the hill in time. My leg just hurts so badly.”

He had waited in line for hours, and even though we showed up with plenty of food, he was going to walk away with nothing. Nothing for himself, nothing for his family.

At that moment, a guy ran by us with two rations and packed them into the trunk of his car. I tried to find the words to stop him or negotiate some kind of exchange. But the words didn’t come. I couldn’t work it out in time. By the time I turned back around, the man with the double portion was gone, and we were choking on his dust.

The chaos and uncertainty is one of the main reasons why so few aid organizations show up in these front-line conflict areas in and around Mosul. There are just too many risks, too many questions.

Would things have gone better if I’d just let the soldiers keep firing bullets into the air, pointing their guns, and using their words as weapons?

Is that the right way? Or maybe the lesser of two evils?

Was I wrong to step in the middle, to raise my voice against what I saw as a dehumanizing way to treat already vulnerable people—treatment which ultimately led to an unfair distribution.

Did I cause that? Did it happen in spite of my efforts? Or was the stage set much earlier in the day by angry rhetoric and violence, all but guaranteeing this outcome.

It’s messy. It’s complicated. It doesn’t make for the picture-perfect aid distribution. Families who’ve been terrorized by ISIS and manhandled by their liberators are tired and fed up—and you would be too.

It’s not like when a family walks into a refugee camp and surrenders their sovereignty for the sake of aid. When you go to the front-line, hard-to-reach places, you have to meet people on their terms.

Which is why it’s so much easier to stay in the relative safety of the refugee camps and provide aid there to those who are willing and able to leave their homes. Thankfully, there are many qualified friends already doing that work.

But there are hundreds of thousands of people in and around Mosul who do not want to leave their homes (or cannot), who do not want to surrender their sovereignty in search of help. Someone has to be willing to go into the conflict zones to reach them and help them in their time of need—this is where we need to be. 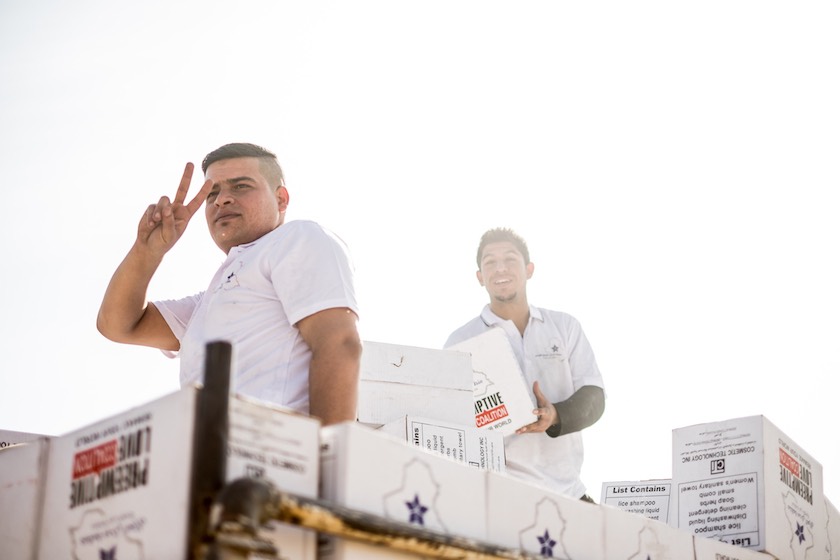 The disabled man who limped up the hill, the schoolmaster who made sure others had food but never got any for himself, the bombed-out, starved-out families who are tired of being pawns in someone else’s war—they are the reason we keep coming back.

That’s who we’re here for.

Providing aid in and around Mosul—it’s messy. It’s hard. Some days, you grow numb to the violence and destruction all around you. And then some days, it breaks your heart.

But we will not stop. First in, last to leave. Preemptive Love.