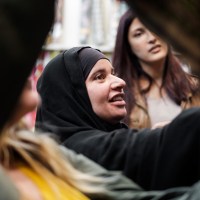 Nawras has one of those faces that’s always on the verge of smiling. Even after everything she’s been through.

Her husband was a soldier who was killed by ISIS while defending their home, north of Baghdad. Their entire community had to flee when their village was destroyed, and came to this camp soon after.

In a large swathe of Iraq, the women still stay home to look after the home and children, while men bring home the money that feeds the family.

So when a woman is widowed, as Nawras and so many others did during the wars of the last two decades, she loses her husband, the father of her children, and her family’s provider.

Jobs are scarce in camp, with thousands vying for the same precious few opportunities available. Widows face greater barriers to work, with children and elders to care for at home.  Nawras was depending on support from aid groups, which is limited, inconsistent, and dwindle as the years wear on. As so many in camp have done, she got into debt to meet her family’s basic needs.

So when you showed up to help her care for her family, and find meaningful work, Nawras was so grateful.

Nawras wanted a business for more than supporting her two kids and her in-laws though.  From the start, her additional goal was clear: she wanted to save up to pay the fee required to return to her hometown.

The tapestry of social fabric in Iraq is a complex, multi-threaded one. Family links are extensive: multi-generational and multi-communal, and most are part of a greater tribal structure that has existed for thousands of years, long before Islam or Christianity were part of the picture. And the allegiances of tribes, or different groups within tribes, affect multiple aspects of each family’s life.

In Nawras’ case, the freedom of their family to return home.

Her community hasn’t been allowed to return to their village because of deep sectarian wounds with neighboring communities that are still raw, and further complicated by perceived ties to ISIS. The tribes have decreed that each family in their village has to pay a sizeable reparation settlement in order to return.

Remaking home after war is complicated, sometimes despairingly so. There is a very real fear of violent backlash, despite the agreed reparations that her family would pay to return. Camp is the family’s home for now, but they dream of one day saving enough to return safely.

And you were there to say “yes” to Nawras when she needed you the most.

Nawras has more reasons to smile than she did before, these days. In her first week of business, she sold $150 worth of fabric! That’s not too far from a month’s wage for most people in the displacement camp—if they are lucky enough to earn a wage at all—so she was off to a terrific start.

Five months after you helped Nawras get her business off the ground, all of her prior debt is gone, her kids are in school, and her in-laws are provided for. Demand has been so good that she’s thinking about expanding the physical size of the shop as a next step, so she can stock more varieties of fabric that customers are asking for.

By donating monthly, you give Nawras and other displaced war widows a lifeline to a better future. And your donation enables more than just startup capital for small businesses. It’s also ongoing support of coaching, issue resolution, help when they need it, and partners to celebrate their successes with.

Help Nawras and other displaced widows rebuild their homes, lives, and futures. Give monthly. Give today.