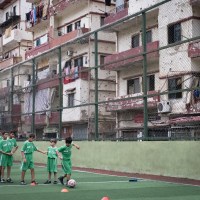 [In a Lebanese community known for conflict, even open warfare, a soccer program is bringing together kids who wouldn’t otherwise have the chance to meet their neighbors. Monthly food distributions during the season schedule make the program good news for the whole family.]

I would like to announce the beginning of our soccer training program. We have 150 participants in this program, hence 150 families.

Uniforms and shoes look amazing. There is so much energy and excitement on the field. It is astounding to see how the frustrating situations of everyday life fade when the ball starts rolling. Teams are eager to play, they won’t leave the field even after specified hours.

I can’t find words to express the euphoria and amount of pleasure that one feels when you look at the faces of the children.

Food parcels will be distributed this Friday for the families of our players, and we will have more news. More to come on this one. -Michel Tannous

The soccer tournament is ON!

After 2 months of training, hard work, and commitment, our little champions are ready to play a tournament. Details of the games are in the picture below.

Playing regularly, and training several times a week was an amazing activity for these kids. They waited impatiently for the training and games to start.

Some teams and coaches take the tournament very seriously, but along the way, the purpose of this project was attained—children made friends with neighbors they thought were enemies.

The teams they are part of consist of friends who they once thought were not friends. But now they will do their best to win alongside one another. The perception of neighbors being enemies has changed in most of the children’s minds to become teammates instead.

Ahmad, the grandfather of Randa, explains how providing food assistance alongside soccer impacted his family. He said “we are passing through very tough times. Providing the basic needs is very challenging—we can barely afford food. It was a great surprise to know that the football [soccer] program in which my granddaughter is participating, is offering us food assistance. It is a very smart combination of assistance. Food is the number one need for everyone today due to the crisis in the country.

It definitely made a difference in our lives because food is very expensive and the income is barely sufficient for us to ensure the basic needs of the family. I am very happy to receive this assistance and hope that it continues until some kind of solution occurs in our country.” -Michel Tannous

This is our third and final [food] distribution for the project. We are distributing 150 food boxes today. What changed is that the weather is bad today, and so we have to support a few of our friends, with the transportation of the food boxes to their houses.

And, what’s particularly interesting and heartbreaking, is that this food box’s price is about 180% of an average salary now. And the situation is getting worse and worse, every time the currency crashes more.

So on the 24th of December was the final game. And all the children and their families that we…that were engaged in our program were all…they all met on the playground that the final match was going to take place and it took place over there.

People were so happy during the game, it was…it was amazing. It was as if, as if people are disconnected from the dire crisis and dire reality and the country, they are living in. It was very, very nice.

Of course, the team who won was cheered, and they took the cup, and other teams…second, third teams had medals. Yeah, so that part of the project was amazing.

Now, the final distribution of food boxes we did in December took place a little bit, a few days before the game…before the final game. Back then…now it’s worse—now it’s worse. But back then, the food box would cost like 180% of an average salary of an employee. And people who are employed are lucky because unemployment is way above 70% in Lebanon. And so food insecurity is increasing.

Still to come: interviews with team players, and a look at what it’s like to play in a place surrounded by violence.