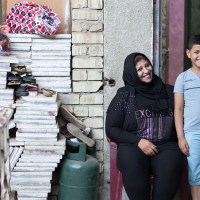 Many children see their parents as heroes. Abeer’s boys know their mom is a hero.

If Abeer and her three sons lived in New York City, their apartment would be described as a third floor, one-bedroom walk-up. They simply know it as home. They used to live in a different apartment in the same building. Abeer points it out as we walk past and shows us the black soot-stained walls around the boarded-up window and door. Several months ago, a fire consumed the apartment and nearly took their lives.

It’s not certain if the fire started because of faulty wiring, but the flames began in the bedroom and quickly spread throughout the apartment. Abeer managed to get her boys out and closed the door behind them. Neighbors, trying to be helpful, opened the apartment door to see if there was anything they could do. Fresh air and oxygen rushed into the burning apartment through the open door, adding fuel to the fire—the apartment was consumed, and everything Abeer and her sons owned was lost.

At 32-years-old and a single parent, Abeer was forced to start life over again. But she was ready. She gave her boys life, she saved their lives from a fire, and she continues working to make a life for them.

Abeer knows every square inch of their tiny apartment. One of the first things she did after moving in was to push a small, round level around the floors, looking for the flattest and most level spots. Abeer has been making candles since 2009 and needed to find the perfect place to pour and cure her candles.

She doesn’t like working on a table. In a tiny apartment with three active boys, it’s just too stressful. So she sticks with working directly on the terrazzo floors, at the edges of the room between the floor mat and the baseboards.

Abeer works efficiently—heating wax in an aluminum pitcher immersed in boiling water in her kitchen nook, just a few steps away. She’s not self-conscious at all as we watch her work. She has the confidence of someone well-practiced at their skill. After the wax is heated, she lifts the pitcher, carefully wipes off the water, and slowly pours the hot wax into the copper vessels she prepared earlier.

Abeer smiles as she works—she loves making candles. She loves it so much that it’s both her work and her hobby. Her source of income and a source of joy.

In quiet moments Abeer nurtures dreams for the future. For herself, she dreams of owning a little home of her own. And for her precious sons? Abeer works hard to help them finish their schooling. With an education, she says, they can accomplish anything they can dream.

Candles provide Abeer with the resources she needs to parent well and dream for her future. In turn, she provides her boys with the tools they need to prepare for their own promising futures.