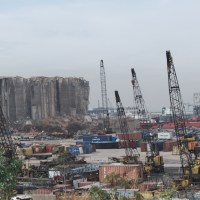 August 4, 2020 6:08pm local time. A massive fire at the commercial port of Beirut triggered an earth-rocking explosion and devastation beyond the world’s imagination.

Our friend Sami was in Beirut when shock waves created by the port explosion ripped through homes and apartment complexes—glass shards littering the city. He lives in the tension between nostalgia for home and mourning for the foreseeable future of his country moving forward. While his reality may seem distant from ours, there is little difference between the two.

Sami grew up in Ashrafieh, one of the oldest districts of Beirut. He calls himself a “son of Ashrafieh.” He spent his childhood there, got married there, and watched his own children grow up on those same streets. As a lawyer, he was able to support his family well financially. Life was never predictable, but his work ethic always made up for the lacking “normalcy” in their situations.

The explosion forced Sami and his family to move outside of their neighborhood while repairs were being made. The economic crisis turned his hard-earned money into mere numbers on paper—in all practical terms, his savings disappeared. Loving through action and providing stability for family became bitterly difficult for a man that pursued his ambitions for the sake of others before himself.

“The neighborhood is gone. There is no neighborhood anymore. It is all disruption,” said Sami. Disruption of work, family, and relationships. Residents of Beirut watch in despair as their homes become hubs for thieves.

“The country is poor. And corruption has spread around it. There is no electricity. No gasoline, no gas, no water,” Sami expressed in frustration. “How can Lebanon live? How can it live?”

Sami asks a question we often neglect to think about: How could anybody live with hope while their basic amenities are not being secured and protected?

The lack of security in basic human measures such as food, water, and shelter, leads people to operate out of scarcity rather than compassion. As of July 1, 2021, 77% of households in Lebanon do not have enough food or enough money to buy food. For our Syrian refugee friends in Lebanon, that number reaches 99% that are suffering from food insecurity.

Sami’s story is a testament to this tragedy.

“The houses are broken, shattered, opened… and the thieves are attacking the houses night and day without anyone watching them or penalizing them,” he said. “They stole the motor, the fridge, the chandeliers, and the lights. They broke them. They stole the air conditioners. They stole everything. They even stole the faucets.”

The lights, the air conditioner, and the faucets. These have become the new luxury goods worth stealing. From car thieves to grocery store robbers, people are still searching through the ruins of what is left behind for justice.

Sami always practiced patience for his situation in Lebanon, even carrying the responsibility of providing for his family at the age of 14. After living through a civil war and Lebanon’s various conflicts with Israel and Syria, he saw the distorted reality of violence and the way it stole everyday joys. He is no stranger to the unpredictability of tragedy and sacrificing the way things should be for the way things are.

But Sami still longs to return home. His history in Ashrafieh far outlives the current state of economic, political, and social unrest.

“All our memories are here. We are waiting to go back home,” he said.

Sami needed a partner to walk through every stage of rebuilding the life he once knew. He needs to rebuild his trust in a world where disruption is not the “new normal.”

This past year, our global community of peacemakers supported Sami and thousands more devastated by the blast in Beirut. We reached out–from 49 countries–to meet our friends in Beirut with exactly what they needed at the moment. As a result, there were hot, cooked meals when families were still reeling from the blast, and food packs filled with groceries when they returned home. Our community of peacemakers is rebuilding homes and replacing appliances to make the homes livable and help keep families secure.

Helping families like Sami’s to move home was an important start to helping rebuild trust and security in a damaged city. But together, there is so much more to do.