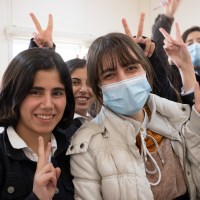 The second their math lesson ends, the room explodes with the energy of teenage girls. Notebooks close with a firm thwack, chatter and laughter fill the air, and for the whole ten-minute break between classes, bodies move. During class, these Grade 12 students are still, and serious about their studies. But during the break, they are full of life. Their smiles are so infectious, that it’s almost possible to forget that these young women are refugees, displaced from Syria, and working hard to catch up on so much life lost to war.

The Power of Education to Protect Displaced Teens

We all know that school is important. But it is doubly important for children displaced by war. School provides a place of normalcy for children, many of whom have experienced violence, hunger, isolation, and other incredibly stressful situations. School also helps prevent exploitation and reduces girls’ vulnerability to sexual and gender-based violence, teenage pregnancy, and child marriage.

According to UNESCO, if all girls completed primary school, child marriage would fall by 14 percent. If they all finished secondary school, it would drop by 64 percent. Other UNESCO research shows that one additional year of school can increase a girl’s earnings by up to a fifth – bringing benefits for the girls themselves, their future families, and their communities.

This is something that we are helping to change.

School is in Session?

In a high school in Iraq, hemmed in by the eastern perimeter fence of a camp for Syrian refugees displaced by war, young people are getting the kind of education that will pave the way for a better future.

For a number of years, the school was funded by a large international organization. But funding stopped as of this school year. The school manager was left in a terrible situation: he had a school, but no teachers. He had more than 230 Syrian students–inside the refugee camp and in communities across the region–who were desperate to finish high school, but with no way to make that happen.

We have served many of these families for years, so the school manager reached out, to see if our community was willing to fill this gap in funding: 20 teachers and a bus to bring students to school 6 days a week. Of course, we said yes! This high school is the only one in the region where refugees from Syria can enroll to earn their high school diplomas.

They are crystal clear about their hopes for the future. Some of these young women still carry the dreams of childhood, of becoming doctors—a common ambition for Syrian kids. Some have had to abandon their childhood dreams to work toward something more practical.

Some of these young women spoke in perfect English, Kurdish, and Arabic, outlining their plans to secure scholarships to a local private university. And some carry the terrible weight of their brightness and ambition along with their family’s precarious financial situation—as soon as high school is finished, they will find a job, almost any job, to help feed their families.

Sitting with these students–smart, outgoing, and keen to learn–a terrible reality settles in. Had this community said no to funding their teachers, their education would have ended. None would have access to higher education. All of the boys would have gone on to low-paid jobs, with no real prospects to improve their lot in life. The girls would stay home and wait to marry if the family had enough resources. They would work low-paid jobs if not.

This gap in funding could have ended the dreams of so many families and made the high cost of war last even longer.

Instead, this group of students, currently studying to take their next set of exams, will always have options. With a high school diploma, there are doors open that war cannot kick closed. And this community of peacemakers made it possible.