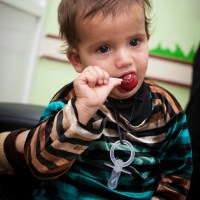 As we plan for 2014 and all we hope to accomplish with you in Iraq, we have to size up our obstacles.

We’ve got to know what we’re up against if we’re going to take steps toward eradicating The Backlog together. Unfortunately, working in Iraq tends to mean pretty big obstacles, but we aren’t afraid because time and time again you guys have pushed us forward and obliterated barriers that we previously thought impenetrable. Here are three of the biggest barriers we’re sizing up in 2014:

There was a time when Iraq’s neighbors envied her healthcare services. People even traveled to Iraq from other countries for treatment. Fast-forward through several wars and a particularly crippling era of sanctions and you have something totally different: a medical infrastructure largely incapable of serving its population, often lacking even the most basic medical equipment and personnel.

Don’t think every city is suffering from crippling decay or that Iraqis are totally unable to treat patients. What I mean here is that they’re way behind. One of the best examples of this is our Najaf program, which we recently canceled at the recommendation of our partner doctors.

Najaf’s chief cardio-thoracic surgeon is bright, willing and eager to learn, but his hospital—and especially the pediatric ICU—is severely underdeveloped. We don’t shy away from underdeveloped. We love living and working in Iraq, attempting what other NGOs deem impossible.

But the lack of development was one part of what led to the end of our work in Najaf (at least for now). Many of the nurses tasked with keeping the children alive have inadequate training, and they are often without basic tools like respirators and essential medicines. We were ready to teach them, and we encouraged them to buy the needed equipment, but they ultimately threw in the towel.

Last year we decided with the locals—at the request of the locals, in fact—to stop sending Remedy Mission teams to Najaf in hopes that, eventually, Najafi politicians and hospital staff would allocate more funds and effort toward caring for their children.

We’ve already written about the headline-making violence happening in places like Fallujah and Ramadi. There are countless things about this situation that break our hearts, but the saddest might be that many of the people in Anbar are just loving, everyday Muslim families caught between forces who would rather play them like chess pieces than see them prosper.

Much of the media’s reporting on this situation has lacked nuance, making it seem like Fallujah is full of and overrun by Al Qaeda supporters, but the situation for most people there is more complex.

Do they—Arab Sunnis—support a Shia-led Iraqi government they feel has mistreated and marginalized them? Do they side with Al Qaeda and fight the government? Understandably, most residents consider both to be bad options and some of the larger tribes have formed their own go-between group, attempting to stand up to both sides while protecting Fallujah’s civilian innocents.

At least by our estimate, the situation in Fallujah isn’t getting better, which means we are unable to work there for the foreseeable future.

The hospital has been “hit” by shelling, according to friends there.

The director of the hospital—another friend of ours—is missing and no one has seen or heard from him in weeks.

Our partner cardiologist from Fallujah, Dr. Firas, was trapped outside the city and is now looking for employment opportunities in Dubai or the Kurdistan region.

If it begins to let up, there is a chance we could be invited back sometime in the future, but it’s impossible to tell. We are still hopeful that Fallujah will open up and that we will be able to bring Remedy Mission teams to the city again soon. For now, though, things are delayed until the situation settles.

This one is a little bittersweet, and doesn’t technically classify as an ‘obstacle’ in the way the previous two do. More and more of Iraq’s developed neighbors are looking to treat Iraqi children and train Iraqi doctors and nurses. For us, that means competition.But should it?

We have the same goal. We may take different routes getting there and, at times, we may philosophically rub each other the wrong way, but, for us, anyone interested in eradicating The Backlog is considered an ally.

So this is an obstacle to us working in Iraq, but it is a victory for Iraqi children waiting in line for surgery—it’s something we celebrate!

Our program in Basra is a good example of this as the local doctors there recently decided to host surgical teams from India. Ultimately our hope is to see Basra’s doctors and nurses thrive and for their children to get the treatment they need. If that happens alongside Indian training teams, outstanding!

As we have seen with our first Remedy site in Sulaymaniyah, opportunities to save lives with former partners and programs often pop up when we least expect it. The key thing is always being ready to serve Iraqi children when the opportunity presents itself.