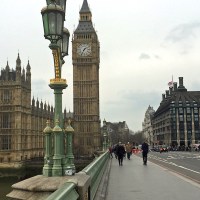 Maybe you’ve seen the hotly debated photo of a Muslim woman walking through the scene of Wednesday’s terror attack in London. (We’re not sharing the photo because she’s asked people to stop circulating it after becoming the target of online abuse.)

If you have seen it, you probably already have a strong opinion about it, and about her.

But what if I told you that our response to this photo says more about our beliefs than it does about hers?

As humans, we are constantly trying to interpret the world around us. But in the process, we have a tendency to interpret things in ways that confirm our existing beliefs or expectations. It’s called “confirmation bias.” We all do it.

So when we see a Muslim woman walking through the scene of a terror attack, we are likely to interpret that scene in a way that confirms our beliefs about Islam, terrorism, women, and how we think we’d behave in that situation.

The truth is, we know nothing about this woman. This image captured a single split-second of her life and we have no idea what she did in the moment before this or the moments after. We don’t know what was going through her mind, or how she was feeling in this moment.

Everything we think we know about this woman, and her response to this tragic situation, originates in our own assumptions and expectations.

That’s why our opinion of her, and our interpretation of her behavior, says far more about us and our beliefs than it does about her, or about her beliefs.

Take a moment—and instead of analyzing this woman to figure out what she might be thinking or feeling, or what her behavior might suggest—analyze your own thoughts and feelings about the image. Think about your own context and how that has shaped your perception of her.

Don’t rush past this. This is an important part of peacemaking. Because peacemaking doesn’t start with others. It starts with ourselves, in our own hearts and minds.

If we want peace, we must learn to reject our own confirmation bias and suspend judgment of others so we can love them.

*The woman in the picture has spoken out to clarify and defend herself. According to The Guardian, she said that “her feelings at the time were of sadness, fear and concern, and that she had talked to other witnesses to try to find out what was happening and see if she could offer help. She then called her family and helped a woman get to Waterloo station.” She went on to say, “Not only have I been devastated by witnessing the aftermath of a shocking and numbing terror attack, I’ve also had to deal with the shock of finding my picture plastered all over social media by those who could not look beyond my attire, who draw conclusions based on hate and xenophobia.”

**We also don’t just get to love the misunderstood Muslim woman. We also have to love those who accused her of indifference, even as we push back on their assumptions and, above all, defend those wrongly accused.