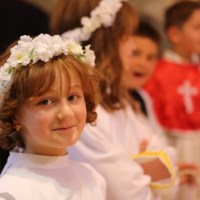 What the Convergence of Passover, Easter, and Ramadan Can Teach Us

Human diversity is a lot like biodiversity: once it’s lost, it’s gone. And we may not realize how much we need it until it’s too late.

The last Jewish doctor in Baghdad died recently. Thafer Fuad Eliyahu was known as the “doctor of the poor,” treating anyone who couldn’t afford his care for free.

The Jews of Iraq once numbered over 150,000. Now those who are left can be counted on one hand. There aren’t even enough to meet the minimum requirement for a synagogue service.

There has been a Jewish presence in this region since at least the 6th century BCE, when the Babylonian Empire sacked Jerusalem and its inhabitants were sent into exile. Jews were a vibrant part of the culture here for centuries. After the establishment of an Israeli state in the late 1940s, persecution of Iraqi Jews increased, until they were offered a chance to leave Iraq for Israel—on the condition that they forfeit their Iraqi citizenship. Within a couple years, almost all had left. Those who stayed continued to be targeted for persecution.

The disappearance of a community or culture from a society leaves a hole that can never be filled, a wound that can never truly heal. What was seen as “other” turns out to be a vital, irreplaceable part of ourselves.

Baghdad will never be the same without its Jewish quarter.

Today, history is in danger of repeating itself, only this time with other minority groups. Christians in Iraq—those in the Assyrian, Armenian, Chaldean, and Protestant sects—once numbered upwards of 1.5 million people. Since the US-led invasion in 2003, however, their numbers have dwindled to as few as 300,000. Yazidis too have struggled to maintain their presence in Iraq. Targets of a genocide that killed some 5,000, many survivors have fled their homeland—likely never to return.

It’s not often the holiest seasons of Islam, Christianity, and Judaism converge as closely as they do this year—Passover concluding on April 4, the date Protestant and Catholic Christians observe Easter, with Ramadan beginning a week or so later. For those who identify with one of these three faith traditions, the closeness of our holy days should remind us of our connection to each other—the ways in which our stories and cultures overlap.

This year offers a unique opportunity to take a step toward greater understanding and appreciation for a culture, identity, or religious tradition different from your own. But there is a common misconception about these cross-cultural or interfaith efforts: it is sometimes assumed that you have to dilute your own identity or tradition in order to appreciate someone else’s, that the end goal is some bland homogeneity where cultural or religious distinctives are effectively erased.

Nothing could be further from the truth.

A few years ago, Christians who fled ISIS had a chance to return to their bombed-out community north of Mosul, to celebrate Easter in their own church for the first time in years. ISIS had used their sanctuary as a training ground for its militants. The building was still marred by graffiti. Inside, the altar was broken. An icon of Jesus had been defaced.

But the people returned to worship anyway. A few of us from Preemptive Love were invited to join them, including my friend Ihsan. As a Muslim who has grown up in Iraq, Ihsan had never been to a Christian church service before. He had been inside a church maybe once or twice in his life.

I asked afterward what the experience meant to him. His answer was as unexpected as it was powerful:

To be present and see all those people celebrate… this is what Iraq is. This is what Iraq should be. If you take the Christians out—if you take others out like the Yazidis and other religions—if you remove all this diversity, it will not be Iraq anymore.

The answer to sectarianism (a struggle hardly unique to Iraq) is not the erasure of other groups—whether by forcing them to leave or requiring them to assimilate into the majority. The answer, as Ihsan suggests, is to understand that diversity is part of what makes Iraq, Iraq. That without this diversity, Iraq is diminished.

Recognizing this truth didn’t require Ihsan to change anything about his identity. It doesn’t require anyone else to change theirs, either. Instead, it requires us to view diversity—the full spectrum of human experience and identity—as an asset rather than a liability, as something to be celebrated rather than feared.

In the end, human diversity is a lot like biodiversity. One it’s lost, it’s gone. And we may not realize how much we needed it until it’s gone.

May the convergence of Passover, Easter, and Ramadan remind us that we really do belong to each other, that our diversity is part of what makes us, us. That there is room at the table for us all.