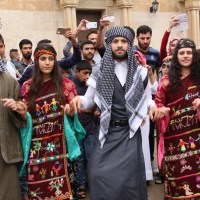 We could aim to build back Iraq the way it was before… or we could build it back even better. With greater peace and unity.

This effort is bigger than all of us. One local group known as  Bridging Communities in the Nineveh Plain is doing their part by rebuilding the diversity of Mosul and the surrounding area, while bringing different communities together. Before ISIS, this area was known for being home to many minority groups including Christians, Yazidis, Shabaks, Turkmen, and others.

Much of that diversity was lost to the terror of ISIS. Most religious, ethnic, and cultural minorities fled because they were targeted by the militant group. ISIS so thoroughly destroyed their homes and villages, and so many of them experienced such severe violence and trauma, that families are hesitant to return, even now that ISIS has been driven out of Mosul.

Over the last year, Bridging Communities organized a number of peacemaking events across the region. They held workshops about social cohesion, displayed art to highlight the beauty of diversity, organized tree-planting ceremonies, and had a celebration of various cultures’ dance, food, and music.

For young people, there was a soccer tournament, a foot race, a reading festival, and a day set aside to replant trees burned by ISIS.

The sheer volume of events is impressive and inspiring. But to me, the most inspiring part of the project is their hope—their vision for an Iraq at peace, united in its diversity.

In the moments when you’re ready to give up, when peace feels like a pipe-dream, think of groups like this, holding peace events in the rubble of war. Let their unrelenting hope and inspiring visions of peace compel you to envision the peace you desperately want to create.

Peace is possible—if we can only see it.

Peacemaker Fridays are published weekly to share stories of people unmaking violence around the world. Be inspired. Take action.