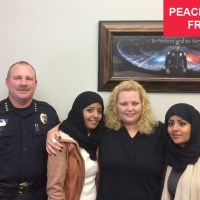 It was one of those small situations that escalated quickly.

At a Walmart in North Dakota, three women got into an angry exchange of words that went from verbal abuse to threats of genocide in a matter of minutes. Over parking.

It all started when Leyla and Sarah Hassan, sisters from Somalia, parked so close to Amber Hensley that she couldn’t get into her car. So she let them have it.

The Hassan sisters’ video of the incident shows Hensley slinging slurs and violent threats at them, focused primarily on the fact that they are Muslim immigrants. But… on the flip-side, it also shows one of the sisters baiting Hensley, calling her “fat,” and even egging her on during the confrontation.

The sisters posted the video on social media. And it went viral.

Local media picked up the story and the resulting interviews revealed two entirely different stories of how everything went down. Hensley accused the sisters of mocking her for her weight and calling her offensive names before the video started rolling. She also accused them of saying offensive things about Jesus, though the Hassans vehemently deny the accusation. It was a mess. Hensley rightfully lost her job over it.

Then, when many would have thrown their hands in the air and walked away, Fargo Police Chief David Todd had an idea: he decided to get the women together. To talk. Face to face.

Chief Todd sat the women down and facilitated an honest dialogue between them. The result? Repentance, forgiveness, and reconciliation.

“With an openness to reconciliation, these women have come together and talked through this incident and expressed their sincere regrets, apologies, and most importantly—forgiveness to each other.” Chief Todd wrote on the police department’s Facebook wall. “This process has also allowed them to gain understanding and respect for each other.”

Hensley could have chosen to love anyway—even though the Hassan sisters parked too close to her car, even though they’re different from her. If she had responded differently, the conflict may not have occurred. Now, this doesn’t mean that she had to simply accept that she couldn’t get in her car. She could’ve politely said something like, “I can’t quite get into my car. Would you mind backing up for a second while I get in?”

And Leyla and Sarah Hassan could have chosen to love anyway—even though Hensley was rude, caustic, and angry. If they had responded differently, the conflict may not have occurred. Now, this doesn’t mean that they had to accept verbal abuse. They still could have—and should have—called the police, but they didn’t need to yell back or call names. That only escalated the situation. Because hate leads to more hate. Violence begets more violence.

There were almost certainly other people around, too. (Have you ever seen an empty Walmart parking lot?) Why did no one intervene when they heard a woman threatening to murder all the Muslims? Why did no one call the police?

There were so many missed opportunities for peacemaking in this story.

It wasn’t until one person finally chose to respond to hate with love, by treating people who were behaving badly as fully human—that peace was made. The Fargo police chief could’ve given up on these women. He could have decided that divisions in our society are a fact that we just have to live with.

Instead, he chose to love anyway. And it changed the course of the story by creating the possibility of reconciliation.

These are opportunities for peacemaking. I guarantee you will have at least one opportunity to make peace this week—whether it’s with your children, spouse, friends, coworkers, clients, or strangers in a parking lot.

Will you take it?

Peacemaker Friday is published weekly to share stories of people unmaking violence around the world. Be inspired. Take Action.