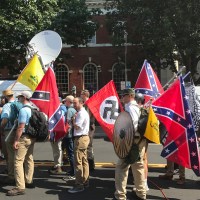 Terms like “extremism” and “radicalization” are frequently used when talking about terror groups like ISIS or Al-Qaeda. But you don’t hear them used as often when talking about violent white supremacist groups in the US, Canada or Europe.

Even though the process of radicalizing someone into all of these groups is almost exactly the same.

And once you’re in an extremist hate group, getting out—deradicalizing—is nearly as impossible as getting out of ISIS.

That’s why Life After Hate exists. To help people leave home-grown violent extremist groups and heal from their hate, so they can arrive at“a place of compassion and forgiveness for everyone, including themselves.”

Life After Hate was founded by former members of these violent extremist groups, who have dedicated their lives since leaving to unmake the violence they used to create. Each founder has their own story of how they got swept up in skinhead, white supremacist, and neo-Nazi groups and eventually found their way out—at great personal risk and, often, with dire consequences.

The most inspiring thing about their story is that instead of distancing themselves from the violent groups they left or becoming paralyzed with anger for the hardships those groups cause, the founders of Life After Hate are choosing to love anyway.

The way they see it, because of their past experience in extremist hate groups, they are uniquely positioned to respond with love, compassion, and empathy to those still in them.

Life After Hate has created strategic programs to counter violent extremism, recruitment, and radicalization, while also actively reaching out to members of these groups who want to leave but feel stuck. By offering people a safe, judgment-free way out to their own hate, they are helping to heal the wounds of racism and white supremacy in communities across the US.

One of their more innovative programs, #WeCounterHate, flags violent, hateful, or threatening tweets—and discourages their spread by committing a donation to Life After Hate for every retweet. That way, members of extremist groups are forced to think twice before spreading hateful speech. It’s brilliant. And it seems to be working—flagged hate-tweets end up being retweeted at a fraction of the usual rate.

The team at Life After Hate also does extensive speaking to tell their stories and educate people about why someone would join violent extremist groups and why they might leave. Their goal is to help people develop compassion and empathy toward people in these groups because “we understand the roles compassion and empathy play in healing individuals and communities.”

In other words, you can’t fight hate with hate. Shouting down violence will only push it into the shadows. So if we really want peace, love is the only way.

Life After Hate is addressing something that many people have yet to fully acknowledge—violent extremism and white supremacy in the US. And they’re doing it with love, kindness, compassion, and empathy.

Peacemaker Fridays are published weekly to share stories of people unmaking violence around the world. Be inspired. Take Action.