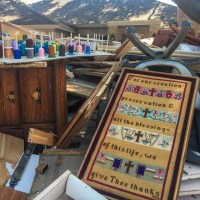 A six-foot pile of debris greeted us as we got out of the car. On top was this prayer—hand stitched, framed… and now discarded. Another casualty of Hurricane Harvey.

Could anyone in this west Houston neighborhood even say this prayer anymore? I wondered. Especially after everything they owned—homes, cars, possessions, memories—was swept away in a wave of toxic sewage

This neighborhood didn’t just flood. When water spilled over the banks of the Addicks Reservoir, just south of here, it took out a nearby sewer station. As a result, everything here flooded with five feet of human waste. The water line on the houses—except it wasn’t a water line—was up to my neck.

When we got into our vehicle that morning, we didn’t know where we were going. Some days are just like that in the early stages of a disaster response; it’s almost impossible to plan even a few hours ahead. Then we got a message on Facebook from one of our supporters. One of you.

“This is completely unorthodox,” she said. Then she told us about this neighborhood where families had lost literally everything. They were falling through the cracks. She told us about the piles of the debris and the sewage and the health risk and the frustration of trying to coax even the smallest amount of help from the authorities.

“So I’m throwing the net wide,” she said. “These families don’t need clothes and food. They need their homes rebuilt.”

A few thousand miles away in her office, our colleague Courtney saw the message and called us. “You need to go,” she said.

And this place… it was bad. Flood-damaged neighborhoods in Houston all have a certain smell to them. Mildew mixed with the detritus of personal effects slowly rotting in the Texas sun. But this… this was something different. It hit you the moment you drove in.

The neighborhood itself looked like a war zone. (And we’ve been in a few of those.) Everything was destroyed. The piles of debris were even higher—and they were outside every home. The grass was dead. The bushes were still covered in human waste.

Then we saw this prayer outside one of the homes, carefully laid on top of discarded furniture, mattresses, photos, and children’s toys. Right next to where we parked.

How can anyone say these words in Houston right now? How can anyone give thanks for preservation when literally everything they have is destroyed?

That’s when we met Penny. She was tearing out drywall when we arrived. She’d been at it for days, going house to house. Her own home had escaped the flood, and after being cooped up by the storm for so long, she got sick of it and decided to go for a bike ride. That’s when she saw what had happened to this neighborhood. She’s barely left it since.

Penny has become the unofficial patron saint of Bear Creek, Houston. Not just tearing out people’s houses—she’s befriending them, grieving with them, sharing a beer with them if that’s what helps in that moment.

One of her new friends—whose home was also destroyed—told us that Penny was like “a living god” to her.

The next day, we met Sarah, the one who messaged us on Facebook. Like Penny, she put her life on hold to get this neighborhood back on her feet—and it isn’t even her neighborhood. She’s getting it done. (Also: you try saying no to Sarah when she tells you, “This is where you need to be.”)

We met another Sarah, a nurse running a makeshift clinic out of the back of a pickup truck. Our conversation was constantly interrupted by the steady stream of people needing medical care. A little girl who cut her elbow on contaminated debris. An older volunteer who needed an emergency eyewash. Two college students overcome by the Houston heat and the 95-percent humidity. Sarah took care of them all.

And I realized… these people are the answer to that embroidered prayer. They are what preservation and blessing look like right now in Houston. They’re the only reason some families can even contemplate giving thanks right now.

As a Christian, I grew up hearing about how we’re supposed to be God’s “hands and feet” in the world. Lately, it’s started feeling like such a tired cliche. But these people… they’re it. They’re making me believe it again.

Our friends are continuing to serve this Houston neighborhood, tearing out flooded homes, sterilizing and drying them, and looking ahead to the long rebuilding process. You’re right there with them.

You helped us make sure Penny got the dehumidifiers she needs to dry out homes in half the time. You replenished Sarah’s medical supplies and equipped her and her colleagues with several portable aid stations, allowing them to provide medical care for the entire neighborhood.

The road ahead is long for families in west Houston and our local friends serving here. But we’re committed to walking it with them. Stay tuned for more updates from Houston.