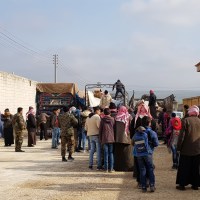 “We experienced every kind of cruelty you can imagine. Strangers invaded our houses, abused our women and children, stole whatever we had, and what they couldn’t take–they broke. We starved and survived without water for days. We live under a pile of rubble nowadays, away from any kind of civilization…What kind of civilized people would do this to us, their brothers and sisters in this country?”

Sometimes listening to the righteous anger of those who are suffering is the best thing we can give.

“We want our dignity back.”

Syria is in the midst of a cold snap—so cold that fifteen children died, four of them babies. In some areas deep snow has come with the cold temperatures. In others, freezing rain and muddy flood waters destroyed what few personal possessions remained. To add to the dire situation, fuel used for heating and cooking is scarce. Everyone in Maryam’s village was displaced, and returned to find that war had pummelled their homes into rubble.

“We are the ones they call ‘workers’,” Maryam (below) said, as she stood a little bit away from our distribution trucks in a small Syrian village surrounded by barren desert. Around her feet were clear plastic bags filled with waterproof boots, sleeping bags and mats that you provided—enough for her whole family. With a vibrant yellow backdrop, the scene looks rather inviting. The reality is a little less sunny though. The term “‘workers”’ in this part of the world refers to daily workers—laborers who live day-to-day, not even paycheck to paycheck.

“We live from the daily income of our husbands and sons, but there is no work nowadays, and we are still experiencing the outcome of the so-called ‘revolution’.” Maryam was genuinely grateful for our help, but she was also angry with her circumstances. Really angry. She’s done with the effects of war, done with what it has done to her family.

Sometimes listening to the righteous anger of those who are suffering is the best thing we can give.

Many of us know what it’s like to live paycheck to paycheck—it’s hard at the best of times. Everything is good for a few days after payday, but it doesn’t take long for the worry to settle back in. Will there be enough this month—enough money, energy, creativity, and courage? Will this be time we run out of money before we run out of month?

Nearly 80% of Americans live paycheck to paycheck. The vast majority of families are a few weeks away from a dramatic downturn in lifestyle. We don’t have to imagine what that looks like. Currently 800,000 US federal employees are locked out of paid employment during the ongoing government shutdown—the longest in US history. The impact of the shutdown on employees is already being seen in the form of missed mortgage payments, and impromptu food banks set up to make sure that the children of government workers get to eat, even though their parents aren’t getting paid.

Not many of us know what it’s like to live day-to-day. Most of us go to bed at night knowing there is something in the kitchen to eat in the morning. If not in the next morning, then one morning soon.

You also gave a grandmother a listening ear to hear her frustrations. Warmth and dignity for Syrians living day-to-day—that’s what your support provides.

Thank you for opening your arms in a wider embrace.