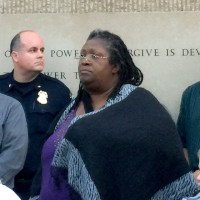 When I was 13, six other track and field teammates and I were walking back from the high school track field when we were stopped by a black van, full of older white teen boys who jumped out waving machetes and calling us “n*ggers” and “b*tches” and threatening to kill us. We were terrified.

I had never been called those words before in my short life, and though growing up in Roanoke, Virginia, I consider now that I was relatively sheltered from much racism—which in and of itself, is a rarity for a black child in the post-civil rights South.

For us that day, we were lucky. Our coach, who was white, drove by and pulled over. She got out of her car, and they got in their van and drove off. She escorted us back to school, where our parents and police were called. I don’t remember much of what happened afterward, but the boys were caught and received fines—and that was the end of it. We moved on with our lives because, well… white supremacy.

I say that because today, I realize my parents and those other girls knew they had no other option but to move on. We didn’t talk much about the incident. We didn’t think about it. We moved on.

Then my daughters experienced racism in their own school years. One was told by her playmate’s parents that she couldn’t play with him because she was “darker than a paper bag.” The other was called “n*gger” throughout her school years in Duluth. They were also expected to move on and get over it.

One dropped out of high school after finally having had enough when her last tormentor put violent action with the n word and my daughter fought back.

The other never looked at white people the same again.

But eventually, they moved on.

I’m tired of moving on, letting it slide. Lighting a candle and back to business as usual.

Police violence is still moving on over the lives of families and their victims.

White supremacy is still moving on over the lives and existence of people of color, Muslims, the LGBT community, the disabled, the Jewish community, and many more—unchecked and unabated.

For most white people, it’s an easy thing to move on from such unpleasantness. You do it daily.

People driving by that day in my past moved on…

After my daughter dropped out, the school system moved on…

We have a tendency to do that. Bury our feelings or work around them. After the last candle flame is doused tonight, some of you here will undoubtedly move on.

I can’t move on from this anymore. I can’t expend one more sleepless night. I can’t post one more hashtag to symbolize the loss of a human life. I don’t want to make one more speech about the evils of white supremacy, racism, and oppression.

What I can do is put a fire under each of you here tonight to begin dismantling racist systems. What I can do is try to move your hearts and minds to physically begin to stand up and acknowledge that white supremacy, racism, and systemic oppression chain us all in slavery.

What I ask of you right now is to move forward, toward a humanity-based system of governance, support and empowerment that uplift us, one and all—instead of forcing us to move on in willful ignorance and personal apathy for the suffering of our brothers and sisters.

We need to stop white supremacy in its generational tracks.

We need to eradicate racism.

We need to upend systemic oppression.

We need to move it on out of our lives, so we can move forward into the Beloved Community.

The little girl who experienced racism that day in 1977 is now a grown woman with children and grandchildren. I’m not moving on one more day while white supremacy and racism control my life and the future lives of my descendants. I’m making my stand right here, right now. And I shall not be moved until white supremacy has been moved on out of existence.

This was originally a speech was given at a vigil for Charlottesville, held in Duluth, MN earlier this week. The speaker, Kym Young, graciously gave us permission to share it here.