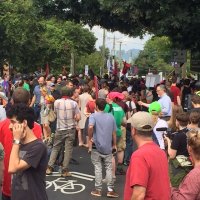 Hundreds of white supremacists marched on a university campus in Virginia last night, protesting plans to remove a statue of Confederate general Robert E. Lee. They were chanting things like “Blood and soil” (a racist phrase with Nazi roots), “You will not replace us,” and the openly anti-semitic variant, “Jews will not replace us.”

At one point they surrounded a small group of counter-protesters and reportedly sprayed them with mace.

An even more violent scene is unfolding in Charlottesville today. Thousands of white supremacists, including neo-Nazis and members of the KKK, have gathered in Charlottesville for a white nationalist rally this afternoon. Hundreds of peaceful counter-protesters, including a coalition of interfaith clergy, have met them in response, as have sometimes less peaceful members of the Antifa movement. Several street fights erupted, and at one point a car driven by a white supremacist deliberately plowed into a group of counter-protesters, seriously injuring several people and killing one.

Response when I said I shoot for Washington Post."How did I know? Both reporters I've talked to have been Semitic." pic.twitter.com/UIfRDSmovq

It’s easy to be shocked at such overt displays of hatred like what’s happening in Charlottesville. It’s easy to say, “I can’t believe this is happening in 2017.” Many of us kidded ourselves into thinking this kind of racism was a thing of the past—or at least that it had receded to the fringes of respectable society. Many of us kidded ourselves into thinking “we’re better than this.”

We expect to see this kind of sectarian conflict “over there,” in places like Iraq. But here? It comes as more of a shock.

This didn’t come out of nowhere. This is a result of our collective failure to address the root causes of racism, to build a table where all are truly welcome, to acknowledge our own prejudices and implicit biases, and to listen to those who could show us a better way.

Don’t say, “I can’t believe this is happening in 2017.” It never stopped happening.

Instead, let’s open our eyes and ears. Let’s choose to listen to our black neighbors, our indigenous neighbors, our Muslim neighbors, our Jewish neighbors, our immigrant neighbors. Let’s hear the lament, the cries, and the pain of their lived experience. Let’s stop worrying about justifying ourselves—about saying #NotAllWhitePeople or #NotAllChristians or the like—and just listen. Let’s believe them—and allow them to lead us to a better way, to the more beautiful world our hearts know is possible.

When hate is loud, love cannot be silent. Love cannot look away. Because the frontlines aren’t just “over there.” The frontlines are where we live, and it’s time we show up to wage peace where others wage war.