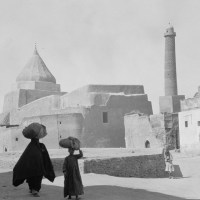 It was late in Iraq yesterday when stark grey and black night-vision videos raced across social media. It was so hard to take in the news: the al-Nuri mosque and nearby al-Hadba minaret, one of the final strongholds of ISIS in the city of Mosul and iconic monuments for centuries, were destroyed in massive blasts.

The al Nouri mosque is infamous today for being the place where ISIS leader Abu Bakr al-Baghdadi announced his creation of a new caliphate. But the mosque was famous in Iraq seven centuries before al-Baghdadi was even alive. So many Iraqis and their friends, like us, longed for the day we could celebrate the liberation of this mosque from ISIS, from within its very walls. Last night’s destruction denied us all that chance.

Mosul without the al-Hadba minaret is like Paris without the Eiffel Tower. Everyone who ever called Mosul home is crushed by this loss.

But the mosque and minaret were just old buildings, right? Iraq is full of them. No big deal. Right?

So Why Does ISIS Destroy These Monuments?

Some of ISIS’s first public acts of violence were the destruction of historic monuments and antiquities—priceless artifacts in the Mosul Museum, the ancient sites of Nineveh and Palmyra, and more.

ISIS media gave their reasons of course. They spoke about how their destructive acts were cleansing, how they alone were preserving the integrity of the Muslim faith and, as they contend, preventing the worship of multiple gods by taking away any built structure that could hypothetically be used for that purpose.

Many believe that ISIS wanted to wipe the slate clean within their declared caliphate—making it easier to start their rule from scratch. And of course there was the issue of money. In addition to all the destruction, they also sold a number of important historical artifacts, providing a significant revenue stream funding their reign of terror.

As for the destruction of the al-Nuri mosque in Mosul, ISIS would have seen its loss to the Iraqi military as a brutal humiliation. Better destroy the mosque than suffer shame, in their view.

But when ISIS destroys historical markers, they accomplish something far more insidious than military strategy—they attack every Iraqi’s sense of belonging.

The list of historic properties destroyed in whole or in part by ISIS is long. None of these structures themselves were worshipped. There is no magic contained in their brick and stone. They were, however, symbolic reminders of diversity and belonging. And that is something ISIS cannot tolerate.

When ISIS destroyed the remains of Iraq’s oldest monastery, Dair Mar Elia, they tried to scrub out a reminder that devout Christians have resided in this space since the 6th century. When they destroyed the tombs of Daniel, Seth and Jonah, as well as museums and libraries, they were on a mission to erase any evidence of Iraq’s shared heritage between Muslims, Jews, and Christians.

When ISIS destroyed Shia and Yazidi sacred sites, their violence said to these groups, “You don’t belong here. You have never belonged here.”

This is one of the worst lies that hate can tell a person: You don’t belong. Your life doesn’t matter.

ISIS’s destruction of ancient cities and markers isn’t about the dead past. It’s about us. Today. ISIS destruction screams, If you don’t think like us, if you don’t worship like us, then you don’t belong here. In fact, you don’t deserve to live.

Love tells a different story. Love shouts, “We have lived together for thousands of years. We are brothers and sisters. You belong! Your life matters.”

Without the tangible touchstones of built structures to act as reminders, love must find another way. We must tell this story of love with our voices, with our lives. We must be living reminders for each other that we belong and that we matter.

100,000+ are trapped in Mosul. Show them their lives matter. Provide lifesaving food and water today.