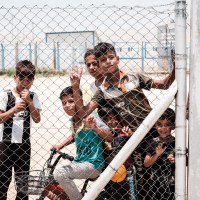 When families are displaced by war, it’s often the boys in the family who bear the incredible burden of keeping the family afloat.

It’s the boys who are sent out to find food, cooking fuel, and whatever day’s work they can pick up to support the family. It’s the boys who protect their moms and sisters, who grow up so much faster than they were ever meant to.

With so much responsibility on their shoulders, many boys never return to school after being displaced. And if they do, the quality of education they can access is often poor.

Meet Jawan. When Jawan was five-years-old, his life was so full of promise. Ready to start school, he could grow into anything he could imagine! He had all the ingredients a kid needs to thrive: family, access to good schools, and a stable community. He was ready to choose backpacks and negotiate for his favorite treats at lunch.

That was six years ago, when the war in Syria was heating up. And suddenly, all of the promise in Jawan’s life evaporated under the weight of war.

When boys leave school as children, it is devastating for their futures. The longer they are out of school, the more unlikely it is they will ever return. And without a good working knowledge of modern skills, boys will always be limited to the lowest-paying, most dangerous jobs. For many young men, the only work with steady pay available to them is that of a low-ranking soldier, always positioned on the front lines.

Without a good education, boys grow into men who cannot imagine for themselves a future with possibility. And that is destructive to the whole country.

Young boys need to see positive forms of skill development modeled for them. They need to know that education isn’t just for the lucky few—but it’s something for them!

Middle school boys need to have access to literacy and numeracy skills. They need to learn to work cooperatively, to develop self-confidence, and to communicate their ideas to the wider world.

Teenagers need to learn the kinds of higher-level skills that provide choice. They can choose to make a living in the traditional way if they want, like their fathers and grandfathers. That’s noble work. But it should be a choice they make, and not the only option because they were forced out of the modern economy.

You can provide that for Iraqi and Syrian boys, otherwise left behind. You can provide lessons and tutoring, art and play—the kind of activities we tend to take for granted.

You can make sure that young men have the skills they need to stay engaged in their communities, to earn a good living for themselves and their families, to access work that doesn’t require them to kill or be killed.

Today Jawan is eleven-years-old. He lives in a refugee camp in Iraq, and every day he visits a center where you are investing in his life. He dreams of a future rebuilding Syria. “I would like to go back to my country. I would like to be an architectural engineer in the future because I am very good at mathematics, and I want to build houses for people.”

We can help nurture young men into leaders who rebuild what war destroyed. We can help boys imagine futures with choice—where they have the chance to discover and grow their skills, where they thrive, and not merely survive.

Invest in a future of hope and possibility for young refugee boys.

I want to give to a refugee child’s education.