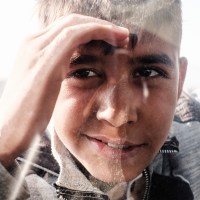 There are two camps in northern Iraq, separated by a single road, for those who fled war. Neither is what you’d call comfortable. Hardship and hunger are present in both. But when you look at these camps, within sight of each other, you can’t help but see the difference.

In one, concrete houses line mostly paved roads. The structures are tiny, and nothing remotely like home. But they’re reasonably sturdy, and they give families a degree of safety and privacy. UN and big aid logos are emblazoned on practically everything. And while the amount of help here is nothing like what it used to be, it’s also not nothing.

Across the road, there are mainly tents—many of them years beyond their useful life. There is far less security here, and far too little help. What meager support there is for the families who live here? It’s disappearing soon.

What makes the difference? One is a refugee camp, and one is a camp for IDPs, or internally displaced people.

The humanitarian aid world is famous for its jargon—for its insider language and acronyms. To the outside observer, it can all seem pretty opaque. But some labels matter. Arguably, none matter more than the labels refugee vs. internally displaced person (IDP).

Right now in Iraq, thousands of our friends are about to lose the only lifeline they have, because they are the “wrong” kind of displaced person.

So what exactly is the difference between a refugee and an IDP? And why does it matter?

A refugee is someone who is forced to flee their country because of war, persecution, or because their home government cannot or will not protect them. To be a refugee, you have to cross an international boundary as you flee.

When that happens, you are registered with an official agency—usually the host country or the United Nations. This allows you to access international aid and assistance. You get legal protections guaranteed by the UN, including certain economic rights and the ability to bring your immediate family with you.

Refugee life is profoundly difficult—and dangerous. But you have at least the possibility of a safety net.

An internally displaced person, or IDP, is someone forced to flee within their home country. If this were you, the circumstances that led you to this point might look exactly the same as a refugee’s. The only difference? You didn’t cross an international border in your bid for safety—either because you didn’t want to flee so far from home, or maybe that wasn’t an option for you.

As an IDP, you fall under the jurisdiction of your home government, not the UN. Likely, you don’t have access to the same international resources that a refugee might have. You aren’t guaranteed the same legal protections or rights. If your country has plentiful resources and the capacity to absorb a major humanitarian crisis, you might be taken care of. But in countries disrupted by war, that is rarely the case.

Back to those two camps, separated by a single road.

The one with concrete buildings and paved roads, as you might expect, is a camp for refugees: in this case, Syrian families who fled their home country’s decade-long civil war. The camp on the opposite side of the road—the one with the weather-worn tents—is an IDP camp for Iraqis displaced within their own country.

Most of the families in camps like this fled as ISIS captured a third of Iraq, beginning in 2014. Some were displaced even before that, their lives upended by the US invasion in 2003 and the insurgency it unleashed.

All across Iraq, camps like these are scheduled to be closed in the months ahead. Some have already closed. Nearly 300,000 people are about to lose the closest thing to home they have left.

The truth is, Iraq simply cannot afford to maintain these camps any longer. If rebuilding a country after ISIS wasn’t difficult enough, plunging oil prices have decimated what’s left of Iraq’s economy. The government depends on oil for 90% of its revenue. Meanwhile, much of the nation’s rapidly dwindling resources are being consumed by the ongoing coronavirus pandemic.

But these displaced families? Many of them have nowhere else to go.

Their homes are still damaged or destroyed by war. Some are now occupied by others who were also displaced—and not everyone here has the documentation or the clout it would take to settle a property dispute.

Often, their communities are without electricity, water, and other essential services. They were spotty at best before. Now, after years of war—they’re nonexistent.

There’s almost no hope of finding a job back home. Some families might not even be allowed to go back—because they were branded as ISIS sympathizers, or because their community is controlled by a militia that won’t let the original inhabitants return.

It’s no wonder that nearly half of those whose camps have already been closed in recent weeks were unable to go home. Nearly half were displaced—all over again.

The real difference between a refugee and someone displaced inside their own country?

Both are marginalized. Both are vulnerable. Both deserve our help. But to be internally displaced—to be homeless within your own homeland—is to experience an added layer of vulnerability.

It means having even less to help you through your most difficult days. It means what little you do have can be taken from you at any time.

Tens of thousands of internally displaced Iraqis are being forced from their camps in the coming weeks, just as winter is setting in. Many cannot safely return home. For them, it’s not the end of a crisis; it’s the beginning of a whole new one.

This Giving Tuesday, we are showing up for them. We’re working with authorities in Iraq to meet the urgent needs of families who must leave their camps. We’ll provide food and create jobs for them in their home communities—so they have what they need to provide for themselves and start rebuilding.

For many of our friends, returning home now is anything but a reason to celebrate. But they don’t have to make this journey alone. We—all of us, together—can make it with them. We can stop the next crisis, before it starts.

Sign up below to be the first to learn how we’re showing up for our displaced friends this Giving Tuesday. Or give now to provide food and jobs.

Be the first to know what’s happening on Giving Tuesday.