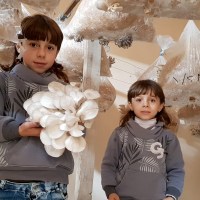 How would you save for the future if you can’t make money? How would you put food on the table, buy school books for the kids, or even get them to school? How do you hope, when the foundation of building that hope, is the proverbial rug that was pulled from under you?

Who are you when everything you used to be, is taken away from you?

Abdulla lives in a region known to history as the “Fertile Crescent”—a broad swath of land spanning Israel, Palestine, Syria, Lebanon, Egypt, Jordan, and the fringes of Turkey and Iran. It was where agriculture was developed, and consequently, civilization.

In the last decade though, as the Syrian war raged, the land has been stricken by drought and scattered with bombs and landmines, deadening large tracts of a once bountiful land.

Farming went from hard to impossible. People lost their livelihoods, and their ability to build a future.

Related: Mushrooms Are Giving Syrian Farmers Their Identity Back

But today, Abdulla is a farmer. He doesn’t till land, because his fields are still too dangerous to farm. But you brought mushrooms into his life. In a corner of his home, there are plastic bags of pasteurized hay suspended in the middle of the room, weighty with anticipation of the pale, delicate fungi that will flower from their confines.

Abdulla has cultivated 90 solid pounds of this good fungi since he started, which is a better crop than he expected. These mushrooms have been food for his family who—like too many others in Syria—had their home and livelihoods destroyed by civil war. But more than just nutrition, mushrooms are now a business—and income— and allows his family to continue the difficult task of resuming life in a conflict zone.

Related: Hope is Blooming in Syria

Abdulla credits his success to his instructor Dr. Louna, who has since become a friend of the family.

“We are so lucky to… have such an amazing teacher who keeps caring day in and day out, and calling us to ask about our small treasure.”

This is what you do when you dig in for the long term with us. You allow us to help farmers start their lives again, and commit to making sure that they succeed despite the odds.

Helping farmers get back to work after war, is about so much more than simply giving them the tools they need.

It’s as much about making sure that they are supported along the way. It’s about being there to cheer them on, to help them when they fail, to celebrate their successes. You made sure that Dr. Louna could return regularly to check on Abdulla and the other farming families: to make sure their mushrooms were flourishing, to work through problems with them, and to provide them with what they needed to keep going.

This is what you do when commit to helping Abdulla and other farmers: you give them—and their families—their future back. And when Abdulla harvests a bumper crop, as he did this season, you can celebrate too, knowing that he can say today, “I am a farmer,” because you reached out across the world for him.

Keep sowing the seeds of hope. When you give monthly, you’re committing to digging in with Abdulla and the farmers in his community for the long term. You’re not just giving them a job, you’re pledging to stand with them for life.

Support Syrian farmers and bring their land back to life.