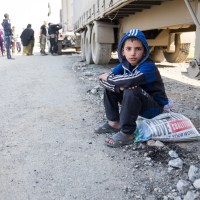 Thousands of families are returning home in Iraq right now.

It would be—if their communities were safe again. If basic services like food, water, and electricity were restored. But they aren’t.

So why are thousands of Iraqi Shia Turkmen coming home now?

Because they have no other choice.

Who are the Turkmen?

The Turkmen are a minority group numbering around 3 million people in Iraq. Neither Arab nor Kurd, they often find themselves caught between dueling agendas. Most Turkmen are Sunni Muslim, but some are Shia—a minority within a minority.

Under Saddam, many Turkmen were forced from their homes under a state policy known as Arabization. Those who remained suffered various attempts to erase their unique identity and heritage.

Turkmen were displaced again in 2014, when ISIS swept across Iraq. Militants targeted Shia Turkmen in particular. Around 600,000 people fled during the war that followed.

The displacement was so severe that Tal Afar, a major Turkmen city in northern Iraq, was practically a ghost town by the time it was liberated. Some 200,000 people once called this place home.

The Turkmen story is complicated. Tal Afar became a hub of insurgency after the US invasion of Iraq. Al Qaeda found a foothold here. So did ISIS.

While thousands of Turkmen, both Shia and Sunni, fought against ISIS, some of  the militant group’s most senior leaders came from here.

If there is any place where the the long, hard work of peacemaking is needed right now, it’s Tal Afar.

Coming home… before there’s a home to come back to

Today, thousands of Turkmen are returning to Tal Afar. Some 25,000 families have made the journey home so far.

But nearly a year after their city was freed from ISIS, there is almost nothing for them to return to. The area around Tal Afar is still insecure, and there are rumors that ISIS is trying to regroup in former strongholds.

So why would anyone come back?

In part, because it’s no longer safe where they were sheltering up till now.

In recent weeks, a fresh wave of upheaval has swept across southern and central Iraq, as protests over a lack of basic services—particularly water and electricity—engulf the country.

But they don’t have to go alone.

We are rushing month-long food packages for 1,000 families to Tal Afar.

We can give these families one less thing to worry about as they take the first step toward rebuilding their lives.

If people here don’t have to worry about food, they can focus on making their homes livable again and earning a living to provide for their children.

A month’s worth of food can go a remarkably long way. As one of our colleagues said, “One month is a long time in the lives of those who calculate every bite.”

But this is about more than food.

It’s about making Shia Turkmen, a minority within a minority, feel welcome again. It’s about healing wounds between Shia and Sunni neighbors. That’s why our distribution to these mostly Shia families will be led by a Sunni.

Because this is about peace.

For these families, returning home is not necessarily good news… yet. But it can be. They have a long road ahead of them, but this food delivery can be a first step, a down payment on their future.

I want to give to Families in Iraq.