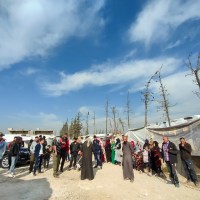 This tiny country of five million people welcomed one million Syrian refugees. But now, as Lebanon’s situation grows more desperate, its government plans to deport 15,000 Syrian fathers, mothers, and children back to Syria each month. Lebanese leaders claim that because Syria is less violent today, it’s time for its people to return home. But the truth is, Syria is still a country at war.

Our Syrian refugee friends live in tents, in mud, with little to no protection from the broiling Lebanese summers and brutally cold winters. They lack legal means to work. They rely on food aid for survival, yet the government forbids aid organizations to bring that aid. Despite these hardships, life in Lebanon is better for Syrian refugees than the life awaiting them in Syria.

Here are three reasons why Syrian refugees are not ready to leave Lebanon:

“Life in Syria today is harder than at any time in the last 12 years,” said a local partner on the ground in Syria.

Although Syria is less violent today, 11 years of war have devastated Syria’s economy. The civil war has erased the development gains made over the last 25 years. Basic civic systems and services, such as health care, water, sanitation, nutrition, education, and protection are barely functioning. Out of a population of 18 million, 14.6 million Syrian men, women, and children depend on some kind of aid to survive. Over 90% of Syrians live in poverty. Food prices have increased 800% since 2020.

Russia’s war in Ukraine has worsened Syria’s dire economic situation by deepening global food shortages. Over two-thirds of men, women, and children, more than 12.8 million Syrians, don’t have reliable access to an adequate amount of food. The average household needs to spend 50% more than their monthly income just to survive, which means they buy only half of what they need, or they go into debt.

The Syrian government promised to pardon political opponents and people who avoided the military draft when they return to Syria. However, returnees fear for their safety. The Syrian security forces have detained, tortured, and violated the human rights of refugees who return, even when they have security clearances from the central government. There are countless checkpoints to clear, and crime is rampant.

Fighting continues in some parts of Syria, especially around Idlib in the northwest part of the country. This region is not under government control. In addition, ISIS is sporadically active in Syria and elsewhere. ISIS still has a significant number of fighters and supporters in Syria and the surrounding countries.

The Syrian government has not rebuilt areas decimated during the war. In 2018, the estimated cost to rebuild was $388 billion, almost 20 times the worth of Syria’s total economy. The US and the EU will not financially contribute to rebuilding Syria until there is a change in political leadership.

The country is contaminated by explosive remnants. The soil is littered with unexploded bombs, explosive remnants, improvised mines, and booby traps, which have not been cleared. Different types of explosive weapons need to be cleared in different ways. Cities such as Raqqa were over 80% destroyed. The overall scale of destruction is so big, that experts estimate rebuilding will take at least two generations.

Lebanon is suffering as is Syria. Lebanon has extended extraordinary hospitality and kindness to refugees for decades. Despite our present-day difficulties, now is not the time to stop standing with the Syrian people—those who stayed inside their country’s borders, and those who fled to find safety outside.