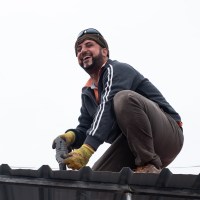 Perched on a roof still under construction, Salim spends nearly as much time answering his phone as he does attaching metal sheeting to the steel frame he built earlier. His phone rings constantly, as residents of this camp for Iraqi families displaced by ISIS eight years ago, try to fit their projects into his packed schedule. He is the only welder in this community of thousands.

Salim is highly skilled and highly sought after. That’s obvious.

Opening his own business is a bit of a full-circle moment for Salim. He used to have his own welding business in Sinjar. Before ISIS came. Before Salim and his family had to flee. Before his shop was looted and his house destroyed.

Fleeing with nothing, Salim had no resources to open another business once he found a safe place for his family to live. He was consumed with survival. Instead, he worked for someone else. He put in the same long hours, and took the same risks, but built up another’s business, and barely earned enough to support his family.

It’s hard to fathom that eight years after the Yazidi community was displaced from their homeland centered around Sinjar mountain, they are still unable to return home.

In the first few years after the land was liberated from ISIS, the area was simply too dangerous to return to. There was no infrastructure or basic services. In the years after, inter-governmental conflict prevented families from returning, as federal and regional bodies continue to battle over who holds authority over the land.

And now the land is being bombed again, on a fairly regular basis, by Turkish government forces. There hasn’t been an official war declared, but for the families who are killed by these drone strikes and bombings, the effect is the same.

And so families like Salim’s neighbors are in another time of transition. They know now that they might never be able to return to their homeland on a permanent basis. They know now that they need to stop waiting for something that may never come. They are choosing to settle rather than perch on the tiny plots of land assigned in their displacement camps.

Even this transition is made difficult by the fact that camp residents don’t have permission to build permanent structures. In summer and winter, they still live in nylon tents. But they have begun installing welded steel frames for their tents, to make them more robust against bad weather. With these steel frames-which can be removed if necessary–they can “build” additional rooms or shelters, and make better use of their plots.

That’s where Salim comes in.

Salim lived in a place filled with opportunity. He had skill and drive, but he lacked the capital needed to buy the equipment and supplies for a business of his own. Just as we have in 14 displacement camps in the region, we stepped in and partnered with Salim, and helped him to open his business. He’s been working flat-out ever since.

“Do you feel this program has added to your family’s future security?” we asked Salim during a post-opening survey.

“Are you confident where your next meal is coming from?”

“Does your business help you to feel independent?”

“Do you have confidence in yourself to own a business?”

Salim’s life is still complicated by the legacy of war, but he now has the ability to create a different future for his family. He is changing the story that ISIS tried to end by building better homes for his neighbors and a more stable future for their community.