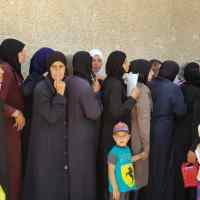 Trigger warning: While no specific stories or graphic details are shared, this article discusses sexual assault.

Far away, poorly lit, and not secure—that’s the shower situation for women in shelters and displacement camps in Syria.

Tragically, it’s not hard to imagine what happens to some of the women as a result.

Fortunately, you are responding.

The shelter where we’re serving—near eastern Ghouta, just outside Damascus—is crowded. Actually, that’s an understatement. It’s overflowing with men, women, and children who have been forced to flee violence and have nowhere else to go.

Here, families can eat the daily hot meals you’re providing. They receive the hygiene kits you supplied. They can get urgent medical care.

Still, life in these camps can be bleak… and dangerous.

In this particular shelter, another large aid organization provided bathrooms and showers, but there aren’t nearly enough: only 60 showers for 14,000 people. Some of the women said they waited in line ten hours just to shower.

In addition, the showers were built so far away from the camp and offer such little privacy or security that it’s creating dangerous situations for women who have already had to flee violence.

Sexual assault is a problem everywhere, but there are certain circumstances that exacerbate it—and displacement is one of them.

The chaos of the camps means that families can’t always keep track of each other. Poverty causes women to have even less power than they usually do over their lives, bodies, and choices. Poor lighting in many shelters creates opportunities for predatory men to take advantage of women and girls.

With a war going on and lax security in many camps, there are few (if any) consequences for assault. Add to this already complicated mix the reality that many men feel a lack of control over their own lives, anger at what’s happening to them and their families, and struggle with their own personal trauma.

All of it combines to create an already dangerous situation for women and girls in the camps.

Then add unsecured shower facilities where women are alone and undressed, and you’ve got a recipe for harassment, assault, rape, and trauma. In just the last few weeks, our colleagues on the ground have reported numerous cases of harassment and multiple cases of assault on women and girls in the camp.

Not willing to leave your sisters in such a precarious and violent situation, you are doing something about it.

You are providing more secure showers, closer to the tents, with excellent lighting and designated security guards. In order to avoid the risky power dynamics of men guarding showers meant for women, powerful and respected women will be recruited to provide security.

We hope this solution will offer displaced women and girls more safety and peace of mind in the midst of extraordinarily difficult circumstances.

The showers will be installed soon and we will keep you updated on their progress. Stay tuned.